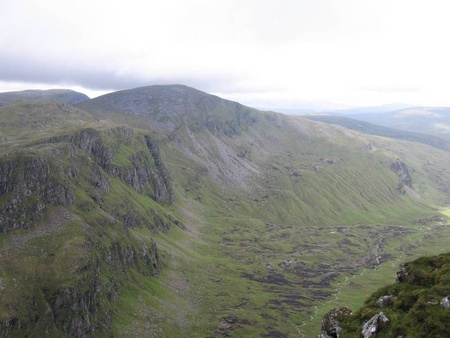 Climate change has impacted on upland plants and vegetation over the past half century, new evidence from north west Scotland has revealed.

Research funded by Scottish Natural Heritage (SNH) and the Natural Environment Research Council (NERC) has revealed for the first time the impacts of climate change on mountain landscapes.

The pioneering work was carried out by the University of Aberdeen and supported by the Hutton Institute and Bergen University, Norway.

Species which increased the most prefer warmer, drier and more acidic conditions. Grasses increased at the expense of dwarf shrubs; flowering plants and lichens.

Scientists now warn that in some cases these changes may be irreversible, leading to permanent changes in our landscapes.

They found evidence of a widespread loss of variety in plant communities across whole mountain landscapes. This is directly causing a reduction in the distinct identity of parts of the Scottish Highlands.

The decline of plant diversity could mean mountain habitats are less able to cope with future environmental change: whether climate-related or pests and diseases.

Scientists found plant variety declined and previously distinct communities have merged into those dominated by more common and widespread plants.

By examining these plant communities in minute details the researchers found changes due to temperature, rainfall and acidification above and beyond grazing impacts.

Commenting on the results, lead author Dr Louise Ross said: "It is striking that one consequence of climate change is the loss of the specialist species adapted to cool, wet conditions.

"We may see the disappearance of some specialist habitats in the far northwest of Scotland, where they are being replaced by more uniform grass-dominated vegetation. This homogenisation' effect is a worrying indication of the loss of plant diversity in the Scottish landscape."

Professor Des Thompson, principal advisor on biodiversity for Scottish Natural Heritage (SNH) stressed: "Climate change is affecting Scotland's mountain vegetation. We may be at an early stage in unfolding events as a result of greenhouse gas effects.

"It is extraordinary to think that we are now reaping the rewards of Donald McVean and Derek Ratcliffe's pioneering field work 50 years ago.

"Back in the late 1950s they endured harsh conditions as they recorded in great detail the composition and abundance of different plants and vegetation. Their work makes it plain we have to avoid the loss of unique elements of Scotland's nature.

"That means we also find ways to reduce other land pressures and improve habitat management where it is driving current declines. That means, for example, finding better and more sustainable ways to manage grazing pressures."

Professor John Birks, a specialist in upland vegetation at the University of Bergen, Norway, who collaborated in the work commented: "This research is pointing to the need for more work to plan for losses of vulnerable plant communities especially the northern heaths rich in liverworts that are confined in Europe to north west Scotland.

"We clearly need to have more specialist surveys such as that reported here in order to detect and predict changes. We have evidence of climate-related changes in the flora and vegetation in the mountains of Norway, but this study is an important first for the north west part of the UK."

The newly-published paper reports part of the work undertaken by Dr Louise Ross for her PhD at Aberdeen University, funded by SNH and Natural Environment Research Council (NERC). Louise collaborated with researchers at the University of Aberdeen and Bergen University, the James Hutton Institute and SNH. The paper's authors are: Drs Louise Ross and Sarah Woodin, and Professors Alison Hester; Des Thompson and John Birks.

The initial botanical plots were studied by Dr Donald McVean and the late Dr Derek Ratcliffe who produced the first definitive account of the vegetation of the Highlands Plant Communities of the Scottish Highlands, 1962. They were pioneer botanists, visiting remote areas and recording plant composition and abundance for the first time.

The process of homogenisation refers to plant communities becoming more similar to each other in composition.

Scottish Natural Heritage is the Government's advisor on all aspects of nature and landscape across Scotland. Our role is to help everyone understand, value and enjoy Scotland's nature now and in the future. For further information visit www.snh.gov.uk