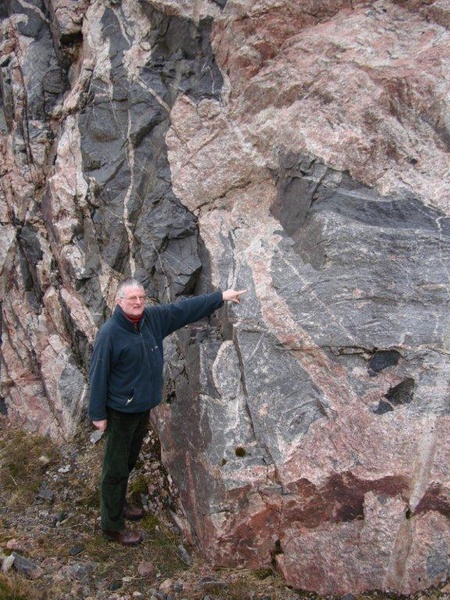 It’s one of the world’s toughest forms of rock, used to create buildings and monuments across the globe, and famously linked with one of Scotland’s main cities.

Now scientists have discovered that granite played an important role in a major episode over 1.5 billion years ago, which eventually led to human life on Earth.

Findings from a study led by the University of Aberdeen in collaboration with the Scottish Universities Environmental Research Centre published in Geology, reveal that the shift from simple to more complex life on this planet was prompted by the high prevalence of granite in the Earth’s crust at this time.

Professor John Parnell from the University of Aberdeen’s School of Geosciences said: “Over 1.5 billion years ago a major transition took place which resulted in the evolution of life from single-celled organisms – the simplest, most basic form of life–– into much more complex, multi-celled organisms.

“Our findings have made the link for the first time that it was the vast amount of granite in the Earth’s crust at this point, which helped this shift to occur.

“The Earth’s crust 1.5 billion years ago was particularly thick which in turn meant that it was extremely hot, as the deeper you extend into the Earth, the hotter the temperature.

“The rocks within the crust which melted due to this heat rose to the surface where they cooled and formed granite.

“Metals prevalent in this granite – especially zinc, copper and molybdenum – were eroded at the surface of the Earth and incorporated into the simple cells which were the predominant form of life on the planet at this point.'

“It was the introduction of the metals into these single-celled organisms that changed their chemistry and allowed them to evolve into the complex multi-celled organisms which were the first step towards more diverse life on Earth.

“When a cell is more complex it means it can perform more functions – and one of the new functions of the complex multi-celled organisms which developed at this time, was sexual reproduction.

“The mixing of genes which are a result of sexual reproduction, give the variations that allow for natural selection, which drives evolution.

“What our findings have revealed is that without the high density of granite, there would not have been enough metal to allow these cells to become more complex, and ultimately this key point in evolution which eventually led to human life on Earth, could not have taken place at that time.”

The scientists derived evidence for their findings from metal ore deposits found in 1.5 to 1.8 billion year-old rocks in many parts of the world, but in particular Australia.

Small scale versions of similar rock types with traces of metal are also evident on the mainland of the North West of Scotland and the Hebrides.

Dr. Adrian Boyce from the Scottish Universities Environmental Research Centre said: "It's a privilege to be able to work on rocks such as these, which are opening up the secrets of key transitions in the life of our planet."

The study was partially supported by funding from Natural Environment Research Council.