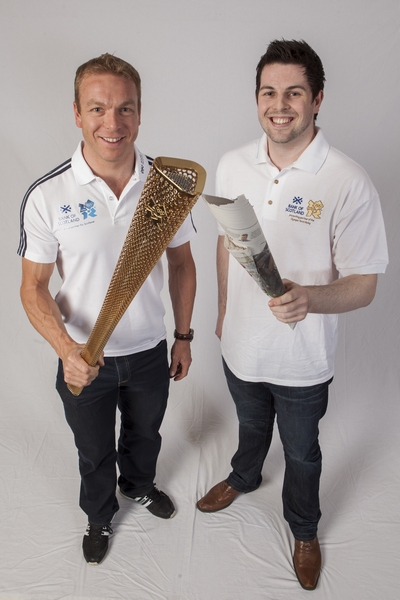 The University is delighted to congratulate a current Geography student and a former Law student who have been chosen for the honour of being torchbearers when the Olympic flame arrives in the Granite City next week.

Eilidh McLeod (21) was on track, at the age of 19, to make the British Winter Olympic team when she suffered a horrific crash while racing in Italy, breaking both legs and spending weeks in a high dependency unit in hospital.

She was told by surgeons who repaired her damaged bones that she would never ski again but the third year geography student applied the skills and determination needed in her sport to her recovery.

Eilidh is now back on the piste, and was the top female competitor at this year’s British Universities Championship in Saalbach-Hinterglemm Austria, winning both the slalom and giant slalom events.

Eilidh’s determination and commitment to inspiring and coaching young skiers with their own Olympic dreams earned her a spot as a torchbearer for the 2012 London games.

Eilidh said: “I feel really honoured and privileged to be chosen. Skiing is my passion, and when you have had something you love taken away, being able to do it again even at the most basic level is fantastic – and I’ve progressed faster than anyone expected.

“I’m hoping to compete again for the Scottish Alpine ski team and at the World Student Games in 2013 but I know there is only so long my body will be able to keep up to the standard required.

“Maybe one day I might be a full-time athlete again but I know it will be a difficult journey. However, having such a serious injury has opened my eyes to the joy you can achieve through coaching and I hope make the most of this when I graduate from Aberdeen.”

Tessa Birley, Student President, said: “It’s absolutely fantastic to see a Universit of Aberdeen student carry the Olympic Torch. Eilidh is an absolutely inspiring student and we are really proud that she is carrying the torch to represent the students at this institution.

“Eilidh has shown that you can manage high level sporting achievement alongside study, and she is inspiring others even after facing injury which looked set to end her skiing career.

“Eilidh shows all students what dedication, determination and hard work can achieve. She’s a great student, friend and athlete - and students are really excited to go out to support her as her carries the torch for our University.

Ryan Whelan (24) was nominated to carry the Olympic torch in recognition of his work to establish a free community law clinic. Now a trainee solicitor with international law firm Pinsent Masons, Ryan graduated from the University of Aberdeen top of his year in 2009 with an LLB in Law, before going on to undertake the Diploma in Legal Practice and a Masters in Law by Research.

During his time as a student, Ryan founded the Aberdeen Law Project, an initiative which sees students provide free legal assistance to the economically disadvantaged under the supervision of practitioners. The first law clinic in Scotland to be founded, operated and led by students, the clinic provides legal representation and educational programmes to members of the public, charities and voluntary organisations who would otherwise not have access to such assistance.  Since launching, the clinic has grown rapidly and was recognised with a prestigious award from the Attorney General last year.

Ryan said: "I am absolutely delighted to be taking part in the torch relay. It really is a tremendous honour and a once in a lifetime opportunity.

“I am both humbled and proud to have been selected as a torchbearer by the Bank of Scotland. I was chosen in recognition of my work establishing the Aberdeen Law Project and I feel particularly privileged to have been chosen for this reason. The project would not be the success it is today without the dedication of a vast number of students, partners and supporters. I therefore carry the flame in recognition of their work as well as my own."

Professor Margaret Ross, Vice-Principal and Head of the College of Arts and Social Sciences at the University said: “It was a pleasure for us to support Ryan in his desire to set up the Aberdeen Law Project,  which goes from strength to strength on the firm foundations that he laid with students, supporters and the community.  I am delighted that Ryan’s personal vision and hard work for the benefit of others are recognised in his role as a torchbearer.”

Ahead of carrying the flame, Ryan recently travelled with one other Scottish torchbearer to meet Sir Chris Hoy in Manchester's velodrome.

Once he has completed his run with the flame, Ryan will be going to the school at which he was Head Boy, St Machar Academy, so that the pupils there are able to see and hold the Olympic torch.

Eilidh McLeod will carry the torch through Banchory at 17.39 on Monday June 11 from Silverbank Crescent to Pantoch Drive.

Ryan Whelan will carry the torch in Aberdeen at approximately 08.02 on Tuesday 12 June from Midstocket Road to Kingshill Road.