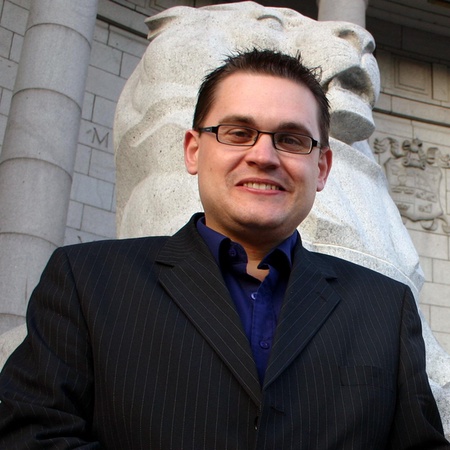 The University of Aberdeen’s Professor Paul Mealor has penned an ‘Aberdeen anthem’ which will premiere at celebrations to celebrate the Queen’s Diamond Jubilee.

The professor in composition has written music to go with lyrics by north-east writer Mike Gibb which celebrate life in the Granite City.

The piece, entitled The Ballad of Aberdeen, is about the ‘pride in being born a’tween the Don and Dee’  and Professor Mealor’s piano accompaniment evokes the lilting sound of the two rivers.

The Ballad of Aberdeen will be performed for the first time at a concert in Duthie Park on Sunday June 3 to mark the Queen’s Diamond Jubilee.

Professor Mealor, whose piece Ubi Caritas was performed at last year’s Royal wedding, said it was an honour to be involved in celebrations for the Diamond Jubilee in Aberdeen.

It is the latest high-profile assignment for the composer who reached number one in the Christmas charts with Wherever You Are, which he wrote for the Military Wives Choir.

He said: “It was a privilege to be asked to write the music to go with such wonderful words by the talented local writer Mike Gibb.

“Although I’m not originally from Aberdeen, it has been my home for the last 10 years and through my work at the University I feel a close connection to the city and its people.

“The Diamond Jubilee celebrations will be a great event and I’m looking forward to hearing the piece performed for the first time.”

The Lord Provost of Aberdeen George Adam said: "We have a great selection of acts for this very special concert at the Duthie Park and we would encourage everyone to come along as it is going to be a fantastic show. There is also the world premiere of the Aberdeen Anthem which has been created for the city by Paul Mealor to mark the Queen's Diamond Jubilee."

The Diamond Jubilee Celebration in Duthie Park takes place between 12noon and 6pm and a park and ride service will operate from Kingswells, Bridge of Don and Calder Park throughout the day direct to Duthie Park.