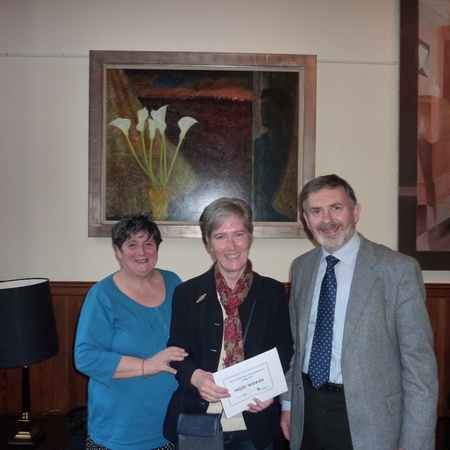 Moira Taylor, a keen storyteller from Peterhead, scooped the £500 cash prize for her short-story Lizze’s Dother.

The Toulmin Prize was set up by the University of Aberdeen’s Elphinstone Institute to commemorate the work of John Reid*, otherwise known as David Toulmin – one of the North-east's finest exponents of written Doric.

Moira’s story will be published in the Leopard magazine and will subsequently be featured on the website of the Scots Language Centre, read by local poet novelist and storyteller Sheena Blackhall.

Sheena gave a reading of the winning story at a presentation at the University of Aberdeen.

Moira said, “I have always enjoyed writing especially in the Doric but only finally managed to make real time for it last year when I joined the Tolquhon Gallery Creative Writing Group.

“I enjoyed and learned so much from the weekly sessions at Udny that it spurred me to help set up a similar group under the auspices of Aberdeenshire Library & Information Services - we now have a thriving group that meets monthly at Peterhead Library.”

Dr Ian Russell, Director of the Elphinstone Institute, said: "We are proud to have been able to honour John and his work in this way and delighted to see Moira take the 2012 Toulmin Prize. We received some very strong entries but Moira’s tale really stood out and was a very worthy winner."

*John Reid (1913-1998) was an Aberdeenshire farm labourer from Rathen, Buchan, who spent most of his life working long hours for very small rewards. In odd moments he jotted down short stories, character studies, and bothy tales.

Issued by
The Communications Team
Directorate of External Relations, University of Aberdeen, King's College, Aberdeen
Phone
+44 (0)1224 272014
Issued on
15 May 2012