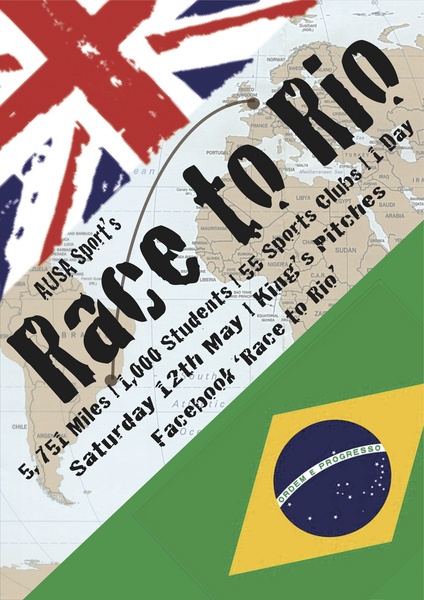 Hundreds of University of Aberdeen students will take part in a sporting challenge this weekend, which will see them clock up enough virtual miles to travel the distance between London and Rio in one day.

Scholars from the institution will run, row and ride the 5751 between the current and next Olympic sites in the ‘Race to Rio’ event which takes place on Saturday (May 12).

Adam Downie, President for Sport, Aberdeen University Sports Union said: “The aim is to bring together University of Aberdeen students to work collectively to cover the 5,751 miles between London and Rio in one day.

“We’re encouraging those taking part to cover these miles in any sports style they please – from simply running the distance to playing rugby or hockey or passing frisbees or basketballs.

“We're also hoping to run a number of exercise classes throughout the day including the likes of Zumba and Step sessions with every step counting towards our total.

“Off-site, the Sailing Club will be splashing through the waves of Forfar Loch, the Golf Club will be marching across the fairways of Royal Aberdeen and the Polo and Riding clubs will be riding into the sunset at Perth and Hayfield respectively.

“The challenge is open and available to all whether you want to do 1 mile or 100 miles and it’s all about the distance, not the speed!

“The intent of the day is to promote the Olympics this summer in London and raise some money for charity, as well as being a fantastic way to mark the end of the University's sporting calendar.

“Proceeds from the event will go to the charity Right to Play which aims to improve the lives of children in some of the most disadvantaged areas of the world by using the power of sport and play for development, health and peace.”

Entry forms, for those wishing to take part in the “Race to Rio”, are available from Sports Union Office and Butchart Reception.

Entry costs £1 and students are being encouraged to get sponsorship for their efforts.

Entries can be made as individuals or as teams of up to 4.

Prizes will be awarded on the day for the greatest distances covered by males and females as well as team distances and total sports club distances.

The “Race to Rio” begins at 9am on the University’s King’s playing fields.