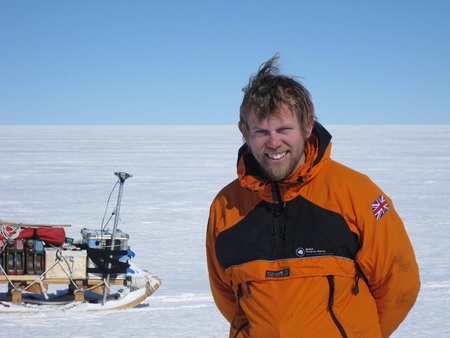 A consortium of British scientists, including a glaciologist from the University of Aberdeen, have uncovered a deep, ice-covered basin – measuring approximately the size of Wales - in a previously little explored area of West Antarctica.

Their findings – reported in the journal Nature Geoscience (Wednesday May 9)- add further evidence to the significant threat ice loss from the Antarctic ice sheet poses to the global rise in sea levels.

Dr Robert Bingham, a glaciologist working in the University of Aberdeen’s School of Geosciences said: “Ice loss from the Antarctic ice sheet is today contributing to around 10% of the observed rise in sea-level around the world.

“Over the last decade, scientists have used satellite observations to observe that certain parts of the West Antarctic ice sheet are losing ice especially rapidly.

“The ice loss is caused by a combination of warming air and warming ocean currents attacking the ice sheet from its edges, but ice loss has been especially pronounced where the bed of the ice steepens with distance inland.

“We used radar-mapping to uncover this new basin which is located in the Weddell Sea sector of West Antarctica, measures 100 by 200 km and slopes inland well below sea level, reaching nearly 2 km deep in places.

“The basin flows into the Filchner-Ronne Ice Shelf, where findings in a Nature paper also published this week project imminent oceanic warming.

“What our survey reveals is that even more of West Antarctica than was previously thought may be unstable and could quickly undergo ice loss.

“This is especially significant given that the ice loss from the Antarctic Ice Sheet makes the greatest individual contribution to the global rise in sea levels.”

The new survey – which was funded by the Natural Environment Research Council (NERC) - was led by the University of Edinburgh with British Antarctic Survey and the Universities of Aberdeen, Exeter and York.

The first clues that the basin may exist were discovered by Dr Bingham and University of Edinburgh glaciologist Professor Martin Siegert when in 2007 they examined reconnaissance radar data from the region collected by aeroplane overflights during the 1970s.

The 1970s data suggested the bed had an unstable configuration, but were too sparse to be conclusive. This motivated a comprehensive new radar survey of this previously little explored area of West Antarctica during 2010-11 which has resulted in these latest findings.