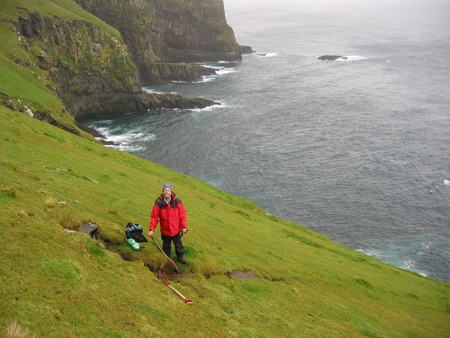 A University of Aberdeen academic has delivered the Rhind Lectures at the Royal Society of Edinburgh.

Kevin Edwards, Professor of Physical Geography, has become the 133rd Rhind Lecturer under the aegis of the Society of Antiquaries of Scotland.

“The Rhinds” comprise a series of six lectures delivered annually on a subject pertaining to history or archaeology, by eminent authorities on the subject.

They have been running since 1874 and Professor Edwards is the second geographer and the third person from Aberdeen to be accorded this privilege.

The series is widely regarded as the most prestigious named lecture series in archaeology and past British-based Rhind Lecturers have included Sir Mortimer Wheeler, Prof. Gordon Childe, Lord Renfrew of Kaimsthorn and Sir Barry Cunliffe.

Professor Edwards presented his lecture – entitled “On the windy edge of nothing: Vikings in the North Atlantic world – ecological and social journeys” - to packed audiences on each of the three days over which the series ran.

Professor Edwards said: “The westward movement of Scandinavian settlers  - the Norse, or Vikings of popular culture - across the expanse of the North Atlantic Ocean was nothing short of phenomenal.

“In less than two centuries, from ca AD 800, a diaspora of largely Norse peoples, their animals, crops, architecture, and uninvited guests such as insects and weeds, had spread 2500 miles from Norway and the British Isles to North America, voyages mirroring the journeys of other Scandinavians eastwards to Byzantium and beyond by way of Russia.

“They carried with them a common language and ways of doing things – social organization, laws, and from ca AD 1000, Christianity; events that are recorded in sagas and other writings.

“What remains of this culture today are the relicts of settlement – farms, houses, churches and wider landscape settings – plus a rich “fossil” component that can be accessed through the study of pollen, seeds, insects, bones, soils, isotopes and DNA.

“The North Atlantic islands settled by the Norse were largely unoccupied and the importation of European agricultural practices had an immediate and profound impact upon what were at that time essentially ‘pristine’ landscapes. Almost uniquely, this provides an environmental baseline against which to assess human impacts upon landscape and the speed of degradation in environmentally sensitive areas. There is additional complexity because the journeying took place against a backdrop of climate change from the “Medieval Warm Period” into the “Little Ice Age”.

“Intriguing events, adventures and personal stories abound, including those surrounding the reality or otherwise of pre-Scandinavian ecclesiastics in the Faroe Islands and Iceland; nationalism, Nazis and “Iceland’s Pompeii”; the attempts to discover Vinland; and the last reliable written sources for Greenland, which refer to an iconic marriage in AD 1408 at Hvalsey church and the departure of a boat in 1410.

“When the Norwegian missionary Hans Egede arrived in Greenland in 1721, there were no Norse, no Europeans, but only “wild people”. The Norse in Greenland especially continue to fascinate, whether as a contested topic in books on societal collapse, or in providing the archaeological core in bids for UNESCO World Heritage status.  Professor Edwards’s lectures have been recorded and will be freely available on the internet.”

The Rhind Lectures commemorate Alexander Henry Rhind of Sibster who bequeathed money to the Society of Antiquaries of Scotland to endow the lectures which perpetuate his name. Further information is available at:

For more information on Professor Edward’s lecture and the series visit www.socantscot.org/articles.asp?pubid=87 .