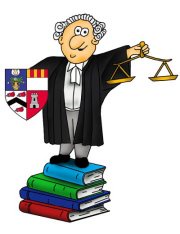 Law students from Aberdeen and Robert Gordon universities will be put through their paces on Wednesday as they go head-to-head in a legal battle, each hoping to win the coveted title of winners of the Granite City Mooting Competition.

The Granite City Mooting Competition is the annual match which takes place between students from both of the city’s law schools. This year, Fraser Matheson (21) from Dingwall and Tom Richard (22) from Wick will represent the University of Aberdeen, while Katie Irving (21) from Fraserburgh and Robert Templeton (24) from Kintore will appear for the Robert Gordon side before Sheriff Summers at Aberdeen Sheriff Court.

This year’s 'case' involves an acrimonious dispute between Thomas Blake and his neighbour, Selina Kyle. The parties are at loggerheads over whether the adage “finders, keepers” should prevail in a dispute over who should get to keep “Sid”, the neighbourhood’s stray cat.

Neale Tosh, President of the University of Aberdeen Mooting Society, explains: “Mooting offers students a great opportunity to gain real experience of being 'on their feet' in court. Each team is issued with a set of facts which relate to a legal dispute. The teams are tasked with researching the relevant area of law and then constructing an argument which sets out clearly and convincingly why their client should win the case. They must then deliver that argument by way of oral submissions to a judge in such a way as to persuade him to find in their favour.

“This competition tries to showcase the best talent that each university has to offer. It is fitting therefore that this year’s competition is sponsored by Brodies LLP, a firm which has a longstanding reputation for the quality of, amongst other things, its litigation work.”

Joyce Cullen, Chairman of Brodies LLP, said: “We are delighted to support the Granite City Mooting Competition, which is a great way for aspiring lawyers to hone the skills they will need in practice and of shining a spotlight on some of the future stars of the Scottish legal profession.

"At Brodies we are committed to fostering mooting and debating at all levels – in schools, through our support of the Scotland team in the World Schools Debating Championship; at university, through the Granite City Mooting Competition, and among the junior lawyers working in our Aberdeen, Glasgow and Edinburgh offices as part of their continuing professional development."

The Granite City Moot will take place on Wednesday, 25 April 2012 at 7pm in Aberdeen Sheriff Court where a Brodies litigation partner, Malcolm Mackay, will present the winning team with their prize.

The final of the Employment Law Mooting Competition will take place on Monday, 23 April 2012 at 5pm in the Old Senate Room, where Mr Lefevre will present the winning team with their prize.