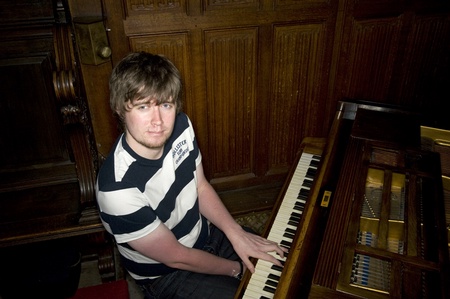 Within months of taking up the piano as a teenager, gifted music student Paul Murray was sailing through exams that it usually takes years of formal training to conquer.

But the University of Aberdeen undergraduate has had to learn how to play all over again - using only his left hand - after a brain tumour and multiple sclerosis left him partially paralysed.

The 21-year-old, who has undergone four major brain surgeries, is also using his compositional talent to rework one of the world’s greatest piano pieces so he can continue to perform, using just his left hand to play music originally conceived for two hands.

His story will feature in a new Channel 4 documentary about the Ballade Number One by Chopin exploring the life of the virtuoso pianist Frédéric Chopin, to be screened later this year.

Paultook up the piano at Bellshill Academy in North Lanarkshire, aged 15 and, despite having no previous formal musical training, reached Grade Five standard within just a few months.

His gift for music saw him quickly progress, learning pieces such as Chopin’s Ballade in G minor in a matter of weeks, and secured him a place to study music at the University of Aberdeen, where he began his studies in 2007.

But during his first year Paul, who also suffers from Crohn’s disease, began to experience crippling headaches and when he returned to Glasgow for a hospital appointment, he was quickly referred to a neurologist.

He was then told he was suffering from a massive brain tumour and would need immediate surgery.

Paul spent four months in Southern General Hospital learning how to walk and talk again but he said his passion for music, and the support of his family, helped to keep up his spirits.

“I had four brain surgeries in total and the first lasted for 14 and half hours. I was told the tumour was very large.

“I had to go through a long period of rehabilitation which meant I spent my 18th birthday in hospital.

“I was told it would take two and half years recovery time but I’m always very positive with these things and I was determined to get back to university and continue my studies.

“Classical music was not something I grew up with – it was almost as if I woke up one day and decided this was what I wanted to do – and I wasn’t prepared to let my illness take that away from me. I felt I was very lucky to be here and wanted to make the most of my life.”

Paul made remarkable progress following his surgery and was able to return to the University of Aberdeen the next academic year to begin his first year again.

However the brain tumour caused damage to the right hand side of his body, leaving him partially paralysed and unable to play the piano as he had before.

“My hand doesn’t work like it used to and when I returned to the university I met with one of my tutors – the composer Paul Mealor – who suggested I try left-hand repertoire.

“This is some of the most difficult music ever written and is not diminished in any way by only one hand as movement and speed are always constant.

“I worked on as much left-hand repertoire as I could and I performed at a concert where I was given a standing ovation and I thought at that point ‘I’m back’.”

But recovering from the brain tumour was only part of the journey for Paul, who has also discovered a passion for composition and is now reworking many classical pieces for the left hand.

“During my second year in 2009 I began to work a lot on vocal music but found I was running out of energy very quickly and started getting pins and needles,” he added.

“Then one day I woke up and I couldn’t feel anything from the waist down. I was referred for extensive testing and scans and was then told I had multiple-sclerosis.

“I coped quite well at first but was warned that with MS, ‘attacks’ causing some paralysis were possible and just before the summer break I was hit with one which severely affected the left hand side of my body.

“Sadly rather than being a short attack it lasted for several months. It did get me quite down as you think everything is going against you but I’ve come out of that now and it’s made me more determined than ever to succeed.

“I concentrated more on composition while my left hand movement was limited and it has inspired me to study for a master’s in composition after I graduate in the summer.

“I’m now building up my confidence again when it comes to performance and I’m working with other musicians who also use left hand repertoire. My passion for classical music has helped me overcome so much and I hope to be able to bring this music to those who, like me, did not grow up with it.”

Dr David Smith, Head of Music at the University of Aberdeen, describes Paul as ‘a truly inspirational student, totally dedicated to his studies’.

He added: “His resilience is astounding.  What amazes me is how his sheer musicality emerges.  When examining second-year performance, we were moved to tears by Paul’s playing – not something that happens often in an exam situation!  He was playing left-handed repertoire that most students – and dare I say staff – would have found difficult enough to play with two hands.”