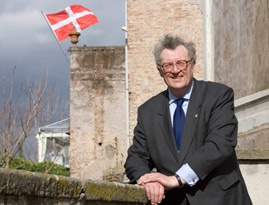 The Prince and Grand Master of the Order of Malta will speak in Aberdeen as part of a bequest to promote a greater knowledge and understanding of the history and culture of Judaism in its various settings.

His Most Eminent Highness the Prince and Grand Master Fra’ Matthew Festing will deliver the 2012 Hay of Seaton Memorial Lecture at the University of Aberdeen on Monday April 16.

Malcolm Hay of Seaton was a distinguished soldier and historian and the last Laird of Seaton in Aberdeen. After his death, his widow, Alice Ivy Hay of Seaton, left a bequest in her own will in 1981 to the University of Aberdeen to establish a memorial lecture series.

Fra’ Festing will present a free lecture entitled “Opportunities for Cooperation between the Faiths of the Middle East: an humanitarian view from the Order of Malta”.

The Order of Malta is descended from the Knights Hospitaller, founded in Jerusalem in 1048 to help and protect pilgrims. Today the Order works in the field of medical and social care and humanitarian aid, in over 120 countries, and runs hospitals, medical centres, day hospitals, nursing homes for the elderly and the disabled, and special centres for the terminally ill. In many countries the Order's volunteer corps provide first aid, social services, emergency and humanitarian interventions.

Fra’ Festing, an arts expert who has served in the Grenadier Guards and holds the rank of colonel in the Territorial Army, became a member of the Sovereign Order of Malta in 1977, and took solemn religious vows in 1991, becoming a Professed Knight of the Order. Between 1993 and 2008 he was the Grand Prior of England. In this capacity, he led missions of humanitarian aid to Kosovo, Serbia and Croatia.

He was elected as the 79th Grand Master in 2008 and is only the second Englishman to hold the position, which ranks as the highest official after the cardinals, and is the only modern leader of an entity within the Catholic Church, in addition to the Pope, to be considered a sovereign monarch.

“Fra’ Festing holds a unique position in the world of humanitarian aid organisations. The Order of Malta does excellent work in the Middle East, where the relations between Judaism, Christianity and Islam have been especially difficult over hundreds of years. Fra’ Festing thus has unique insights into the present interaction between Judaism and the other Abrahamic faiths. His lecture will be of great interest for anyone who wishes to learn more about inter-faith relations and politics in today’s Middle East and beyond.”

To reserve seats for the Aberdeen lecture, which will be held at the King’s College Auditorium at 5.30pm, please contact Will Gibb, College of Arts and Social Sciences, on 01224 272084 or at w.gibb@abdn.ac.uk.