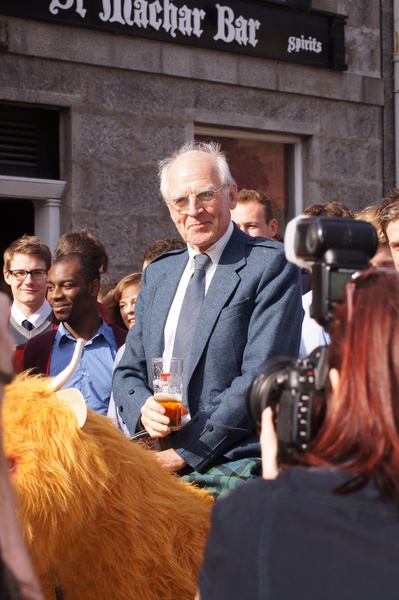 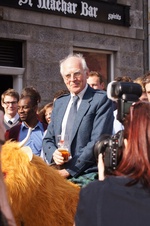 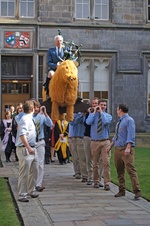 Tradition dictates that the University of Aberdeen’s new rector must ride down the High Street aloft a bull carried at shoulder height by students of the institution.

Today (Friday March 23) Aberdeenshire businessman Maitland Mackie will be officially begin his three year tenure in the role with an installation ceremony.

The Rector, an ancient post dating back to the foundation of the University in 1495, is the students’ representative, particularly in welfare matters, and sits on the University Court.

The ceremony will start at 10.30am with a colourful academic procession representing civic, student and academic life in Aberdeen. University staff and students, along with representatives from the City and Aberdeenshire Councils, Incorporated Trades, MSPs, alumni, and guests of Dr Mackie, will attend the ceremony which will be followed by a reception in the King’s Conference Centre.

The ceremony will feature music chosen by Dr Mackie including Professor Paul Mealor’s Now Sleeps the Crimson Petal, which will be sung by soprano Jillian Christie, a fourth year music student.

The reception will culminate with the new Rector being carried by the student mascot, Angus the Bull, to the St Machar Bar in the High Street of Old Aberdeen, where tradition also dictates that he buy a round of drinks for his student supporters.

Dr Mackie, Chairman of Mackie’s of Scotland, a prominent Aberdeenshire-based family-owned business, said: “It is an honour to be representing students of the University of Aberdeen.

“This brings back memories of my own student days at the University 55 years ago – a wonderful experience which has never left me.

“I’m looking forward to supporting the Students Association, its president, Tessa Birley , and her sabbatical students in their objective  of delivering continuous improvement in that experience.”

Professor Ian Diamond, Principal and Vice-Chancellor of the University, said: “I believe that it is especially fitting that we install as our new Rector today someone who not only played such a full part in student life during their own student days, but has continued an extremely close relationship with the University community throughout.

“On behalf of the academic community I am very pleased to welcome Dr Maitland Mackie to this important role.”

Tessa Birley, President of Aberdeen University Students’ Association, said: “I am really delighted that Maitland has been installed as our new Rector, not least because of his commitment to environmental issues in addition to his knowledge of our University.

“We are confident he will be a real champion for Aberdeen students.”

10.55 Academic procession leaves King’s Conference Centre and enters King's College Chapel
11 Ceremony begins in Chapel: Dr Maitland Mackie will be officially installed by Tessa Birley, President of the Students Association, and will deliver the Rector’s address.
11.45 (approx.) Academic procession leaves Chapel to return to King’s Conference centre, to joined by guests for the reception.
12.15 (approx) Dr Maitland Mackie will be carried by the student mascot, Angus the Bull, to the St Machar Bar where he will follow tradition and buy a round of drinks for his student supporters.

The Rector, an ancient post dating back to the foundation of the University in 1495, has been, since 1860, the students’ representative on the University Court. Rectors serve for three years and appoint to the Court a Rector’s Assessor. Students’ interests are further served on the Court ex-officio by the President of the Students’ Association.

The Rector of the University of Aberdeen has two main roles. Firstly, the Rector has the right to preside at meetings of the University Court, and secondly, he or she is available to represent the students, particularly in welfare matters.

Presiding at meetings of the University Court One of the Rector’s rights is to preside at meetings of the University Court, which is the governing body of the University, in so doing, the Rector has a duty to seek to ensure the smooth running of meetings and to facilitate effective contributions to the work of the Court from its members. He or she has a crucial role in exercising impartiality and in ensuring that all sides of a discussion are freely aired. No member of the Court is present as a ‘representative’ of a particular sectional interest. However, each member brings his or her particular expertise and background to the work of the Court and, for example, the President of the Students’ Association and the Rector’s Assessor both have a detailed knowledge of and interest in student affairs. The Rector’s authority as ‘President’ of the Court exists only at Court meetings: he or she has no delegated powers at other times. In the absence of the Rector, the Court is chaired by a Vice-Chairman elected for this purpose by the Court (normally every three years).

Representing Students Representing students in matters affecting their welfare is the second of the Rector’s two main roles. The sabbatical officers of the Students’ Association and the various welfare services within the University undertake a great deal of work with and for students. However, the Rector has a uniquely independent position: he or she is closely linked both to the Students’ Association and to the University authorities but is not a part of either. That enables him or her to exercise the influence of the distinctive Rectorial position to advance student interests. To assist in this role, each Rector has the right to nominate to membership of Court a Rector’s Assessor who acts as the ‘eyes and ears’ of the Rector when the latter is absent from the University. It is customary for the Rector to ask for the views of students, not least through the Students’ Association, before choosing his or her Assessor. The Rector normally holds regular surgeries in Aberdeen and, during his or her absence, the Rector’s Assessor provides continuity of support and attends to practical arrangements. Rectorial surgeries are advertised in advance in Gaudie, the student newspaper, and give individual students the opportunity to make a personal approach to the Rector.

General There is a potential conflict in the Rector’s role: he or she is both an advocate on behalf of the student body and the impartial president of the University’s governing body. In practice, that potential conflict has not become a reality at Aberdeen.

Students elect the Rector from a choice of candidates all of whom are proposed by members of the student body. The term of office of the successful candidate runs for three calendar years.

The position of Rector of the University of Aberdeen has a long tradition behind it and is prized by students as a way of ensuring that, in the University’s governance, due regard is paid to matters that are of importance to the student body.