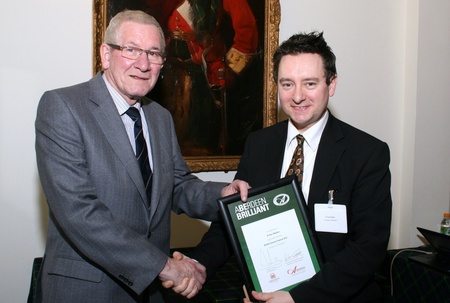 Academics and business leaders who have helped to bring conference business worth £8million to the North-east have been recognised by the Aberdeen Convention Bureau for their contribution to the local economy.

Through its Ambassador Programme, the Bureau works closely with the University of Aberdeen, Robert Gordon University and businesses to bring conferences, seminars and events to Aberdeen.

More than half the business secured in 2011 - including the British Science Festival, which comes to the University of Aberdeen in September - came through the team of dedicated ambassadors.

Around 50 guests attended a drinks reception at the Gordon Highlanders Museum on Wednesday (March 21), where Lord Provost Peter Stephen presented awards to 17 of the 25 ambassadors who secured conferences for 2011 or for the next few years.

The following ambassadors from the University of Aberdeen were honoured at the event:

Many of those appointed as ambassadors have a high profile within specialist fields such as oil and gas, health, food research, science and environmental research, and securing a conference for Aberdeen gives them a wider platform on which to showcase their work among their peers.

Business tourism is crucial to the Scottish economy, with an economic benefit of £1billion a year, and association conferences are vital to sustain this level of growth.

Andrew Pratt, Ambassador Programme Executive at Aberdeen Convention Bureau, said the reception was an opportunity to thank the ambassadors for helping to sell Aberdeen as a destination.

“The awards ceremony is all about acknowledging the efforts of all our ambassadors who have worked with us to influence their peers and bring millions of pounds worth of conference business to the North-east,” he said.

“We rely on our ambassadors to help us bring conferences and events to the city but in return it also gives them the opportunity to showcase the work they are doing locally to their peers, both nationally and internationally.

“We provide free support that could help to secure a future event for the city, working in close partnership with our industry partners and local education and research facilities to promote Aberdeen as an exciting and accessible destination.”

Sales and Marketing Manager Alesia du Plessis added: “Aberdeen is a strong contender in terms of business tourism and Aberdeen Convention Bureau is constantly out there raising the profile of the destination.

“Combined with developments such as the Trump golf resort, public support for the City Garden Project in the city centre, new international hotel brands, increased connectivity and air routes and the strength of the Ambassador Programme and expertise, we can claim a bigger share of the global meetings and incentive travel market.”

Ambassadors work to promote Aberdeen City and Shire as an attractive conference destination by attracting key meetings and seminars to the area, focusing attention on the region and encouraging local economic growth.

In return, the scheme allows ambassadors to showcase their research and raise their own profile within their area of specialism, giving their subject matter a wider audience through Aberdeen Convention Bureau’s support and promotion.

Once a bid has been successful, the Convention Bureau can arrange accommodation for delegates and assist with arranging social events programmes.

For more information on Aberdeen Convention Bureau and the Ambassador Programme, call 01224 288815 or visit www.aberdeenconferences.com