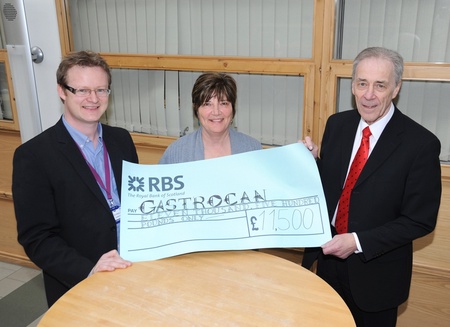 The fight against two of Scotland’s fastest rising cancers will receive a major boost today (march 23) when a fundraising duo handover a further £11,500.

Joyce Byrne and John Barclay have been on a fundraising drive for the Grampian Gastroeosphageal Cancer Research Fund (known as GASTROCAN) for the last three years and have now raised a total of £34,500.

GASTROCAN was set up by Dr Russell Petty, a Clinical Senior Lecturer in Medical Oncology at the University of Aberdeen, and Consultant Medical Oncologist with NHS Grampian, to further research into gastric (stomach) and oesophageal cancers.

While advances have been made in treatment to control gastroeosphageal cancer, cure rates remain low especially in comparison to other cancer types. A patient with breast cancer has an eight out of 10 chance of completely beating the disease, compared with just one in 10 gastroesophgeal cancer patients.

The pair know the value of research into the diseases as gullet cancer claimed the life of Joyce’s husband and John’s best friend, Paddy Byrne, who died in 2008 aged 63.

Paddy, who lived in Inverurie, was a keen musician and he and John played in various bands together over a 25-year period. To raise money, a memorial concert was staged in Garioch Sports Centre in February at which a total of £11,500 was raised for GASTROCAN.

During his illness Paddy received treatment from Dr Petty as did John, who is in remission from stomach cancer.

John, from Danestone, Aberdeen, said: “It was a fantastic night and we were absolutely delighted that so many people came along and helped us celebrate Paddy and raise funds at the same time.

“We wanted to raise money for Dr Petty because stomach and gullet cancers don’t seem to receive the same research funds as other cancers.”

“We are also looking at the symptoms of the disease and how patients and GPs react to them and we are also exploring how new imaging and scanning techniques can be used to improve how the best treatment for patients is selected. A key aim of all our research is to move towards more personalised optimised treatment that has the best chance of success rather than the current ‘one size fits all’ approach”

“It is thanks to donations like this we can continue our fight against this rapidly increasing disease and I’m very grateful to John and Joyce for their continued support.”

PHOTO OPPORTUNITY: 10am today (March 23) in the foyer of the Institute for Medical Sciences, Foresterhill.