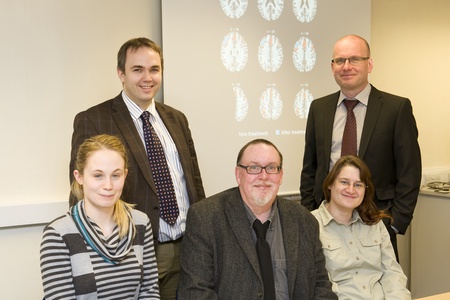 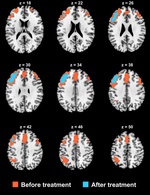 Aberdeen researchers have discovered how a controversial but effective treatment in psychiatry acts on the brain in people who are severely depressed.

Electroconvulsive therapy or ECT - which involves anaesthetising a patient and electrically inducing a seizure - is the most potent treatment option for patients with serious mood disorder.

Despite being used successfully in clinical practice around the world for more than 70 years, the underlying mechanisms of ECT have so far remained unclear.

Now a multidisciplinary team of clinicians and scientists at the University of Aberdeen, Scotland, has shown for the first time that ECT affects the way different parts of the brain involved in depression ‘communicate’ with each other.

In a paper published in the journal Proceedings of the National Academy of Sciences they show that the treatment appears to ‘turn down’ an overactive connection between areas of the brain that control mood and the parts responsible for thinking and concentrating.

This stops the overwhelming impact that depression has on sufferers’ ability to enjoy life and carry out day to day activities.

This decrease in connectivity observed after ECT treatment was accompanied by a significant improvement in the patient’s depressive symptoms.

Professor Ian Reid, Professor of Psychiatry at the University of Aberdeen and Consultant Psychiatrist at the city’s Royal Cornhill Hospital, led the study which involved using functional MRI to scan the brains of nine severely depressed patients before and after ECT and then applying entirely new and complex mathematical analysis to investigate brain connectivity.

The research involved University colleagues Dr Jennifer Perrin, research fellow in mental health, and Professor Christian Schwarzbauer, Chair in Neuroimaging, who devised the new mathematical method for analysing the connectivity data which enabled the findings to be made.

Professor Schwarzbauer said: “With this new method we were able to find out to what extent more than 25,000 different brain areas ‘communicated’ with each other and how the brain’s internal communication patterns differed before and after ECT treatment in severely depressed patients.”

Professor Reid said: “ECT is a controversial treatment, and one prominent criticism has been that it is not understood how it works and what it does to the brain.

“However we believe we’ve solved a 70 year old therapeutic riddle because our study reveals that ECT affects the way different parts of the brain involved in depression connect with one another.

“For all the debate surrounding ECT, it is one of the most effective treatments not just in psychiatry but in the whole of medicine, because 75% to 85% of patients recover from the symptoms.

“Over the last couple of years there has been an emerging new perspective on how depression affects the brain.

“Our key finding is that if you compare the connections in the brain before and after ECT, ECT reduces the connection strength between these same areas - it reduces this hyperconnectivity.

“For the first time we can point to something that ECT does in the brain that makes sense in the context of what we think is wrong in people who are depressed.

“As far as we know no-one has extended that ‘connectivity’ idea about depression into an arena where you can show a treatment clearly treating depression, changing brain connectivity.

Researchers now hope to continue monitoring the patients to see if the depression and hyperconnectivity returns. They also want to compare their ECT findings with the effects of other therapies used to treat depression such as psychotherapy and anti-depressants.

Professor Reid added: “Although ECT is extremely effective, it is only used on people who need treatment quickly: either people who are very severely depressed, who are at risk from taking their own life and who perhaps can’t look after themselves - or patients who have not responded to other treatments.

“The treatment can also affect memory, though for most patients this is short-lived. We monitor the memory function of all our patients receiving ECT in Grampian, and we find that function returns to normal within a few months.

“Given the impact of depression itself on memory, it is perhaps unsurprising that such a rapidly acting treatment has this effect: certainly, the patterns of brain changes we have observed are consistent with this.

“However if we understand more about how ECT works, we will be in a better position to replace it with something less invasive and more acceptable. At the moment only about 40% of people with depression get better with treatment from their GP.

“Our findings may lead to new drug targets which match the effectiveness of ECT without an impact on memory.”

Professor Schwarzbauer added: “The new method we devised for analysing the brain’s functional connectivity in depression could be applied to a wide range of other brain disorders such as schizophrenia, autism, or dementia, and may lead to a better understanding of the underlying disease mechanisms and the development of new diagnostic tools.”