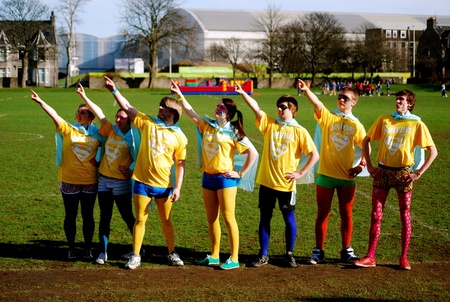 The whole day competition involved teams of seven, each with at least three female members, competing in a huge variety of activities from the starting sprints to rock climbing, assault courses, capture-the-flag and human table football.

Each team nominates a Superman and Superwoman who have to undertake tougher challenges at each station, whether competing for longer, over tougher courses or sometimes carrying the whole team themselves.

The event is entirely student-run and was organised by members of the Sports Union committee who were helped on the day by over 80 volunteers to make it all run smoothly.

Adam Downie, President for Sport said the successful event was a fantastic demonstration of teamwork, organisation and enthusiasm from the students.

He said: “Superteams has been running for many years and this is by far the most organised and well-attended event I’ve seen.

“The enthusiasm shown by both competitors and volunteers helped create a vibrant and energetic atmosphere while the glorious spring sun gave the event a more relaxed vibe.

“Congratulations and thanks to all the people that made it run so well.”

The Sports Union is now gearing up for the Granite City Challenge on Wednesday where teams from over 20 clubs will take on their counterparts at the Robert Gordon’s University to be crowned the city champions.