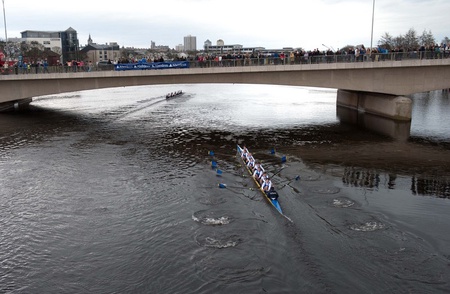 Robert Gordon University has won the 2012 Aberdeen Asset Management Boat Race for only the third time in seventeen years, after taking an early lead.

They won in a time of 8 minutes 13.9 seconds, beating rivals the University of Aberdeen team by four and a half lengths. Aberdeen’s time was 8 minutes 28.1 seconds.

The 2012 race had one of the most competitive build ups in its 17th year history, with students from Aberdeen and Robert Gordon Universities actively involved in supporting their crews on Facebook and Twitter.

The Alumni boat race was also won by Robert Gordon University by five lengths in a time of 9 minutes 0.3 seconds.

Hugh Little, head of acquisitions for Aberdeen Asset Management, who was among the hundreds of race spectators, said: "The build-up to this year's race has been amongst the most competitive we've seen in the history of the race.

“Supporters have been able to follow the crews' preparations online. Our congratulations go to both teams for their sportsmanship and showing what great sporting talent exists in both Universities. Aberdeen Asset Management is proud to support an event which brings the two Universities together in such a spirited sporting event."

Aberdeen Asset Management is an independently operated company, which has been listed on the London Stock Exchange since 1991 and is currently a FTSE-250 (mid-cap) company with a market cap of £2.3bn.

Excluding its smaller private equity offices in the UK, the group has 30 offices located in 23 countries around the globe with its main investment management centres in Edinburgh, London, Philadelphia, Singapore and Sydney, and its property operation is headquartered in Stockholm.

Aberdeen Boat Club (ABC) is one of the oldest rowing clubs in the UK. Founded in 1865 on the River Dee, ABC is now one of Scotland's largest rowing centres. Competitively, members have enjoyed success at both national and international levels as well as generally having the strongest presence at domestic events. In 2002, Aberdeen Boat Club became the first Scottish club to win at Henley Royal Regatta.

The club welcomes rowers in the Aberdeen area with a well-organised training structure for complete beginners. For more information about Aberdeen Boat Club, visit: ww.abc-dee.co.uk