Major diseases are the target of new venture
12 March 2012 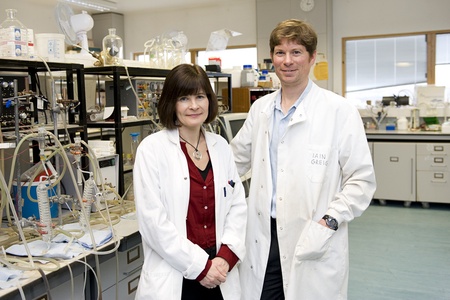 The University of Aberdeen is working with Scottish entrepreneur Dr Derek Douglas CBE to spin out a company to work on the development of new drugs for the treatment of breast cancer, heart failure, diabetes and chronic pain.

Signal Pharma will be the first company to spin out of the University’s Kosterlitz Centre for Therapeutics, which is focused on translating biological innovation at the University into new ways of treating, diagnosing and understanding diseases.

Professor Ruth Ross, a world leading expert in pharmacology, and Dr Iain Greig, a medicinal chemist who helped found another University spinout which is developing new drugs to treat rheumatoid arthritis, are the founders of Signal Pharma.

They have joined forces with fellow University colleagues Professor Michael Frenneaux, one of Britain’s most respected cardiologists, and Professor Matteo Zanda, an internationally recognised molecular imaging expert, while financial and business acumen is being provided by Dr Derek Douglas and drug development expertise by Dr Michael Wyllie, founder and director Global Pharma Consulting.

Dr Douglas is Chairman and Chief Executive of Adam Smith Limited, which has raised over 100 million for early stage companies, including Universiy spin outs.

Sigma Pharma will develop a portfolio of four drug discovery projects based on new pathways and targets identified by the University of Aberdeen scientists that appear to be crucial in the development of major diseases.

Signal Pharma is seeking to raise £1.5 million to develop this portfolio of drug discovery programmes, over a period of 3 years, to the stage at which substantial licensing deals with the pharmaceutical industry could be realised.

Prof Ross, who is also director of the University’s Kosterlitz Centre, said: “The creation of Signal Pharma is a great opportunity to generate both medical and economic benefits based on the world class biomedical research of discoveries of the University of Aberdeen. The company will focus on developing new treatments for breast cancer, heart failure, pain and diabetes.”

Dr Greig said: “This is a very exciting opportunity for pharmacologists and medicinal chemists to work together develop new breakthrough therapies for major diseases that affect huge numbers of people here in Scotland and the UK.  It is particularly satisfying to see ideas that we have worked on for many years reaching the next stage of the development process, which we hope will eventually lead to new drugs that give real benefits to the patients, saving lives and reducing suffering.”

Dr Douglas added: “Having been involved in start-ups for over 20 years I see this as a great opportunity with an excellent team to help start a new and growing industry for Aberdeen.”

Signal Pharma has already received support for Scottish Enterprise High Growth Unit and it is seeking investment in Signal Pharma from private investors and venture capitalists.

The company will employ a number of young scientists in Aberdeen and plans to grow by taking forward a pipeline of new projects in the future.