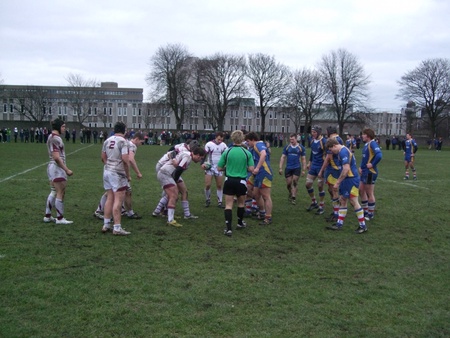 The University of Aberdeen Men's Rugby 1st XV remain on course for Twickenham after a dramatic extra time win over Loughborough University.

They secured a 33 points to 26 victory in today’s match to seal a place in the quarter finals of the British Universities and Colleges Sport (BUCS) Championship 2012.

The game started at a frantic pace and Aberdeen were 10-0 ahead in ten minutes. They continued to press and were 20-0 up soon after. Loughborough then fought their way back in to the game, scoring a try before half time.

In the second half Aberdeen landed two penalties while Loughborough ran in another two tries to leave the score at the end of normal time level at 26-26.

In extra time Aberdeen scored a try, Graeme Clow rounding off a personal points haul of 18 to give Aberdeen the win with 33 points.

Adam Downie, President for Sport, Aberdeen University Sports Union, said: “This is a fantastic result for the University of Aberdeen and for Scottish Sport as we showed the calibre of players up here and our ability to compete with the best universities in England.

“It comes during a very successful season for the whole club, with both the 2nd and 3rd XVs sitting at the top of their league”

The win puts the University of Aberdeen Men’s Rugby 1st XV into the quarter finals of the BUCS Championship, with the final to be held at Twickenham. The team’s next opponents will be either Swansea or Bath pending the result of their match next Wednesday.