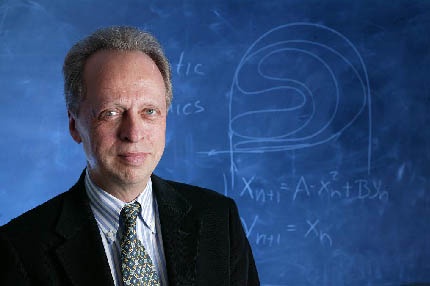 Professor Celso Grebogi, a Sixth Century Chair Professor and Director of the Institute for Complex Systems and Mathematical Biology, is one of 46 new fellows for 2012.

Fellows are nominated in recognition of outstanding contributions to their field and achievement in public service. Sciences, arts, humanities, the professions, industry and commerce are all represented.

Other fellows elected to the society in 2012 include Dr Mary McAleese, former President of Ireland for two terms of office, and Professor Sir Edwin Southern, from the University of Oxford whose work contributed greatly to the progress of the human genome project and revolutionised DNA sequence analysis.

It is the latest honour for professor Grebogi who has also recently been awarded the Senior Fellowship at the Freiburg Institute for Advanced Studies, Germany, elected Honorary Member of the International Physics and Control Society, Russia, became Honorary Adjunct Professorship at the Xi'an Jiaotong University, Chinaand Elected Fellow of the Institute of Physics, United Kingdom.

He said: “I am thankful to the Royal Society of Edinburgh for the election into its Fellowship, and I feel honoured to be associated with so many scholarly distinguished scientists.

“The last twelve months have been a good year for me and I am delighted to be recognised in this way by such an important institution here in Scotland.”

Sir John Arbuthnott, the President of the RSE and eminent microbiologist said: “In my first year as President I am pleased to welcome such a talented group of people to the RSE.

“Each new Fellow has achieved excellence in her or his field of work, whether in academia, public service or business. When I meet the new group of new Fellows at their induction in May I will encourage all of them to actively engage with the work of the RSE for the benefit of society here in Scotland and internationally."