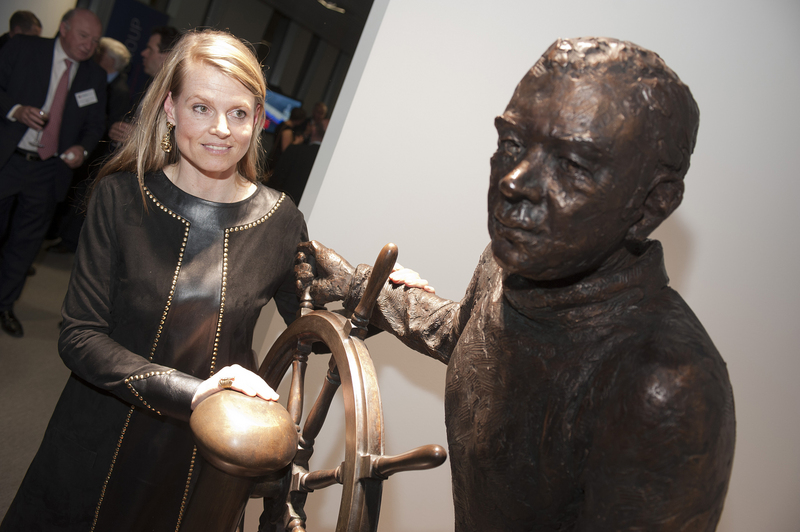 A statue in honour of the late David Craig has been unveiled on the top floor of the University of Aberdeen’s state-of-the art library.

The area is named the Craig Floor and hosts the David Craig Suite, in memory of the man who helped build one of Scotland’s most successful businesses.

The co-founder of Aberdeen’s Craig Group, David Craig, passed away in 2010, just before his 94th birthday.

The Craig Floor enjoys stunning views across the North Sea where he spent much of his young working life and which forms a rich part of the Craig Group’s heritage.

This floor also features the University’s renowned divinity and philosophy collections which will be used to support some of the UK’s top research academics in these fields, who are based at the campus.

The David Craig Suite houses a series of flexible conference and seminar rooms and will be used for University and student events as well as being made available to the wider business community for meetings and informal evening receptions.

A lifelike bronze sculpture which fully captures many of David Craig’s attributes was unveiled.

It was created by Candida Bond who is based near Aberdeen and was an apprentice for seven years to the prolific British sculptor David Wynne, who created the Queen Elizabeth Gates at Hyde Park in London and has sold out many exhibitions all over the world.

Chairman and managing director of the Craig Group, David’s son Douglas Craig, said: “We are delighted to contribute to this fantastic building and the Craig Floor looks magnificent. The David Craig Suite is a very touching and fitting tribute to my father and will inspire everyone who uses it.

“Overlooking the North Sea it is a perfect way to remember David who pioneered fishing in the North Sea, both as a skipper and then at the helm of the group for more than 70 years.”

Principal and Vice-Chancellor of the University of Aberdeen, Professor Ian Diamond, said: “We are honoured to host a lasting tribute to David Craig, who was an inspirational figure throughout the north-east, within our library.”

The Craig Group family has strong ties with the University. Douglas completed his undergraduate studies in accountancy and political economics at the campus and was made an Honorary Doctorate in 2010.

Mr Craig snr was also recognised by the University four years ago when his services to the local business community also granted him an Honorary Doctorate.

He helped lead the family-owned shipping and energy services firm to international success in the oil and gas industry and is believed to have been the oldest chairman of any Scottish company.

However, away from the business world, Mr Craig’s great love was gardening and his dahlias were his pride and joy. Last year, The Royal Horticultural Society officially registered specially-grown dahlias in honour of Mr Craig.

Paying additional homage to much-respected figure Mr Craig, the Royal Horticultural Society of Aberdeen (RHSA) – of which Mr Craig was a long-standing director of the society and latterly an honorary vice president - has appointed his son, Douglas Craig, as its president elect.

The Craig Group remains one of Scotland’s top 100 companies and in the top 20 of offshore service companies in the North Sea. Its divisions operate in Europe, Africa and the US in the areas of offshore support, ROV survey, emergency response and rescue vessels, oilfield supplies and leisure.