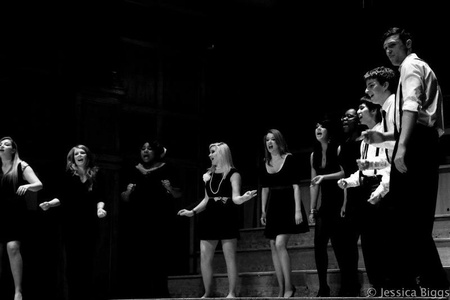 Last weekend the University of Aberdeen’s A Cappella group, ‘Aberpella’ took part in the annual Voice Festival UK, held in St Andrews - a first for the University.

University A Cappella groups from across came together in St Andrews this weekend to perform and celebrate A Cappella, but to also compete in the Voice Festival UK. This year, for the first time, the University of Aberdeen has been represented by the students who sing in Aberpella.

Aberpella, set up this year,  performed against five other established groups, four from St Andrews and one from Glasgow. Three songs were covered by the group; the classic jazz number ‘My Funny Valentine’, ‘Dreams’ by Fleetwood Mac and a mash up of ‘Send Me On My Way’ by Rusted Root and ‘Waka Waka’ by Shakira.

The group impressed judges  and one described forth year Psychology student, Ailbhe Connolly’s lead as, “soulful and captivating”. Another praised first-year Medicine student, Jun Yang Chan’s arrangement of Dreams for its “ethereal” quality.

Nathan Chadwick, founder of Aberpella, said: “As a group, we are so elated with what we have achieved over the past few months of being together.

“To be able to get this far, in such little time; demonstrates the amount of hard work and dedication our members have put in.

“We are proud to be part of the University of Aberdeen and to have the chance to represent the artistic talent that our student population has. Hopefully, we can create a new tradition for our University.

“Since starting with Aberpella, our members have had the chance to feel a greater affinity to our University, but make friends and recognise our own abilities and confidence. We have come so far in such little time; who knows where we will be by next year. We may have not won this year, however we have made sure Aberdeen voices are heard.”

Tessa Birley, Student President, said: “We would like to congratulate Nathan in starting this up. He’s been an inspiration and it’s been wonderful to see the students having a really great time, watching their confidence grow and then to go on and do so well at a National level”.