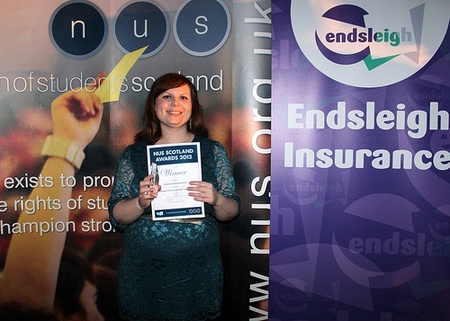 Student representatives from across Scotland came together this weekend at NUS Scotland’s National Conference in Irvine to elect national officers, set national policy and announce the winners of the national awards.

The Ab-Fab Society won the NUS Scotland Award for Best club or society of the Year.

AUSA won the NUS Scotland Equality and Diversity Award, celebrating all the work they do in creating an inclusive and welcoming place for all students, collected by Jenny Batty, President for Welfare and Equal Opportunities.

Tessa Birley, Student President, said, “It was a fantastic weekend for Aberdeen University Students’ Association. We are all absolutely delighted to see two of our students do great work for students at a National level. And it’s wonderful that the hard work of our students has been recognised nationally. ”

Robin Parker, President of NUS Scotland, said, “I am absolutely honoured to have been re-elected NUS Scotland President. I've been amazed at the hard work and enthusiasm of students across Scotland over the past year, and look forward to continue working with them to again make lasting change in Scottish education.”