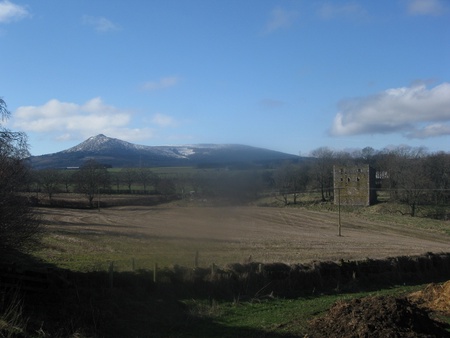 Archaeologists from the University of Aberdeen are calling on the local community to get involved in research to shed new light on the history of Bennachie.

They hope their work – which is funded by a grant of £20K from the Arts and Humanities Research Council (AHRC) – will result in an exciting new heritage project for Bennachie and the surrounding landscape.

Dr Gordon Noble, Lecturer in Archaeology at the University of Aberdeen said: “Whilst Bennachie is widely acknowledged as a historically and archaeologically significant location, very little work has been done in terms of detailed survey and excavation to build a picture of the archaeology that is actually present on the hill.

“The intent of this project is to get the community involved in our research into Bennachie, offering locals the chance to take part in a variety of events on the hill, including archaeological digs.

“We already work closely with voluntary conservation society, the Bailies of Bennachie, and hope to encourage other members of the local community to also get involved.

“The long-term aim is to equip community members with the knowledge and skills they require to do their own work into the history and heritage of their local area.

The initial focus of the research will be to gain new insights into a 19th century settlement of farming families known as ‘the colony’ who resided on Bennachie from the 1830s onwards.

Gordon explained: “ ‘The colony’ were settlers from across Scotland to live rent free on what was then common land, building their homes on what would have been at the time quite marginal land.

“The big landholding estates divided up the land towards the end of the 1860s and the settlers were suddenly forced to pay rent on the land they had spent the last three decades calling home.

“Some left, others tried to remain and fulfil the rent agreement and others were evicted. Within 10-20 years the settlement had been completely abandoned.

“The remains of their homes, garden plots and dry stone enclosures still exist on Bennachie, and our main focus will be on researching the area which encompassed the settlement and excavating remains.

“Work we have already completed has uncovered artefacts including various ceramics and fragments of tableware and dishes.

“We hope analysis of these items and any new discoveries will reveal more about the way in which the colony lived, to build our understanding of how their lives compare to the often less than flattering accounts that appeared in local records.”

The team of archaeologists undertaking the project will host a series of public events throughout May and June offering volunteers the chance to get involved in the research.

Activities will include archaeological digs on the hill, an oral history day with the chance hear and share stories about Bennachie, and an event hosted by the Royal Commission where locals will be offered the chance to learn methods for recording old buildings.

There will also be a music event hosted by Peter Stollery, Professor in Composition and Electroacoustic Music at the University in Aberdeen, where the public will be asked to capture sounds on the hill which will then be developed into a composition.

Local school teachers will also have the chance to liaise with archaeologists from the University to understand how they can build the heritage of Bennachie into the school curriculum.

For more information on these events, and how to get involved in the research, contact Colin Shepherd, colin@scottish-heritage.org.uk

Dr Gordon Noble will also give a free public talk on Tuesday (March 6) at 7pm in the Acorn Centre, West High Street, Inverurie entitled “Bennachie and the Picts”.

His talk will provide an insight into the lost kingdom of the Northern Picts – one of the most powerful early kingdoms of Northern Britain – and their links with Bennachie.

Dr Noble will also give an overview of the Bennachie project and how locals can get involved.

The event launches the new University of Aberdeen Café Scientifique series which aims to bring the latest topics in science to the public.

Taking place in the Acorn Centre, West High Street, Inverurie once a month until June, the series of talks are free to attend and booking is not required.

Topics to be highlighted in the coming months include the renewable energy developments that are taking place around Scotland’s coastline, and an insight into the ongoing work at the Large Hadron Collider – the world’s largest scientific instrument which is probing the very smallest building blocks of matter.

The full programme of Café Scientifique sessions can be found at http://www.cafescienceaberdeen.co.uk/ .