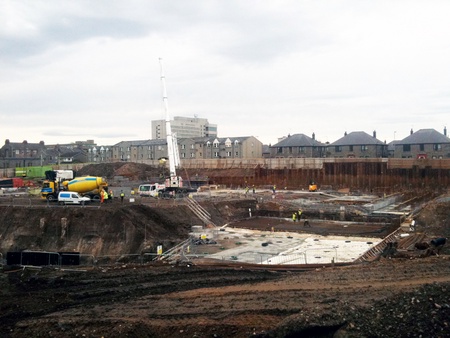 Contractor GRAHAM Construction is pushing ahead with development on the King Street site to create an elite and community swimming facility that will encourageparticipation in water-based activities at all ages and abilities and provide long lane training opportunities for elite swimmers.

The aquatics centre – the next phase of Aberdeen Sports Village – is a joint project between the University of Aberdeen, Aberdeen City Council and sportscotland and is on track for opening in Spring 2014.

David Beattie, Chief Executive of Aberdeen Sports Village, said the project was reaching an exciting stage and that an opportunity existed to create the most advanced facility in Scotland.

“We have funding in place from the three partners to deliver an outstanding facility but we are also looking to the private sector to support some of the ‘added extras’ that would make this one of the best aquatics centres in the UK,” he said.

“We have factored into the construction process fixed under and above water cameras which will provide invaluable and seamless playback of technique from the moment a swimmer leaves the blocks. No other facility in the UK is equipped with such a system.

“We also hope to incorporate the latest in scoreboard technology which will allow interaction with spectators, particularly at large events through having the capability to have video replays.

“The opportunity exists to create an aquatics centre with facilities superior to anything which currently exists in Scotland and we hope that the north east business community will get behind this initiative and support the extras that will make this a truly inspirational facility.”

Work on the site is continuing at pace - the pool area has been fully excavated and contractors are now pouring the concrete foundations and walls for the pool tanks.

Once the concrete tanks are tested for integrity, the building will begin to take on shape as the superstructure is erected over the summer.

Mr Beattie added: “There was a great deal of work to complete at the beginning of the project in stripping and demolishing the former Linksfield Academy, which was completed in October last year.,”

“Since then work has been progressing at pace and we are now starting to get a sense of the scale of the building,”

“The facility will be a great asset for the community. The main pool will have a dividing boom and part floating floor which will enable it to be used for a variety of purposes from children’s swimming lessons and disability groups, to club use and for performance squad training”

Eddie Higgins, project manager for GRAHAM Construction, said: “We were very grateful for the mild winter this year, which allowed us to push ahead with piling and excavation works to create the shell of the 50m competition pool and diving area.

“Prior to Christmas, we dug out more than 12,000m3 of material to create space for the pools and since the turn of the year work has continued in earnest on the main pool floors and walls. Around 600m3 of concrete and nearly 100t of reinforcing steel has been installed to date.

“The facility is really beginning to take shape and we are making good progress with the pool construction.

“The GRAHAM team is looking forward to late summer when we will start to put the steel structure in place and the community will start to see the Aquatics Centre come to life.”