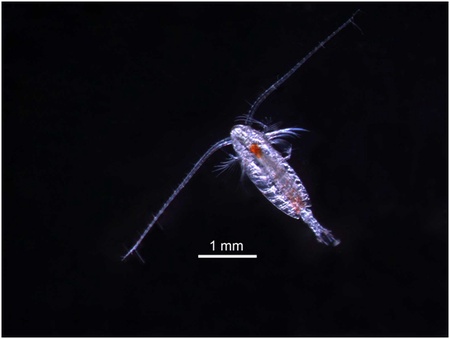 Climate change research conducted by the University of Aberdeen and Marine Scotland Science highlights the risks of conducting an experiment only once.

Scientists examined how different climate change scenarios affected one of the most important organisms in our ocean - tiny marine crustaceans called copepods, which are the preferred prey of cod and herring larvae.

Understanding how copepods are affected by climate change is fundamental to better understanding and managing fish stocks.

Researchers widely agree that mankind’s carbon dioxide (CO2) emissions are causing the planet to warm up and are also responsible for ocean acidification - when CO2 dissolves in seawater it produces a weak acid.

A team led by Dr Daniel Mayor, an Independent Research Fellow at the University of Aberdeen’s Oceanlab, investigated how future global warming and ocean acidification scenarios affected the health of copepod eggs.

Unlike many other climate-change studies, they repeated their experiment at a later date and found different results.

Dr Mayor said: “Both of our experiments indicated that the health of copepod eggs remains unaffected when they are exposed to ocean acidification levels predicted for the end of the 21st century. This is great news.

“However our previous research has demonstrated that more severe acidification, potentially arising if a subsea carbon capture reservoir burst open, causes a major decline in the number of copepod eggs that successfully hatch.

“Our most recent study found that the effect of global warming depends on when the eggs were collected.

“In our first experiment we found no clear effect of temperature on how many hatchlings were produced by the eggs.

“But in the second experiment, conducted a week later, increasing the seawater temperature actually increased the number of healthy hatchlings.”

Researchers believe this effect relates to the temperature at which the maternal copepods were acclimated - animals from warmer waters produce eggs that are less stressed by warm water and vice versa.

Dr Mayor added: “Our results highlight a potentially positive effect of global warming - it may increase the number of healthy copepods in our seas, which is good news for the larvae of fish such as cod and herring, and ultimately fishermen.

“The varying effects of global warming complicate our ability to predict how different populations of organisms will respond to climate change.

“They also demonstrate the danger of making assumptions based on one-off studies.”

The team’s findings are published in the scientific periodical Journal of Plankton Research.