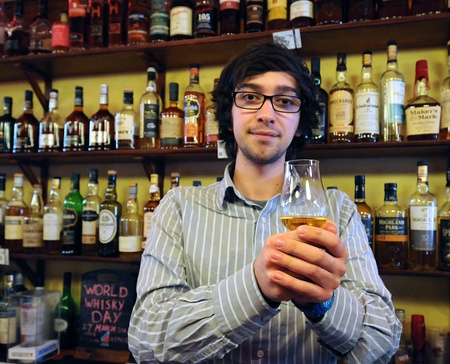 It’s Scotland’s national drink but an enterprising University of Aberdeen student will ensure the rest of the world raises a dram to whisky with the first ever World Day in celebration of the spirit.

Blair Bowman, 21, has founded World Whisky Day and the inaugural event will be held on March 27 2012 – four years to the day after the young student tasted his first dram.

Unlike other drinks such as vodka, beer and even tequila, Blair said he was amazed to discover whisky did not have a dedicated international celebration in its honour and quickly set about establishing his very own ‘day’.

Through his website worldwhiskyday.com7,000 people from across the globe have already come together to register their events as part of the celebration.

Blair has also created his own blend with Master of Malt to mark the occasion, while juggling exams and assignments for his MA in Hispanic Studies.

The third-year student said his interest in whisky came from his parents – who met when they too studied at the University of Aberdeen – but that it grew when he joined the institution’s malt whisky society.

“The whisky society was the first club I joined in freshers’ week and it had just been formed so I took the total members to three!

“But there is a real interest in whisky among the younger generation and it soon took off. We now have 250 members and around 50 per cent are women.

“There is often a perception that young people are only interested in binge drinking and cheap alcohol but the success of the whisky society demonstrates that there are many of us who want to understand and appreciate a drink with an exceptional heritage and variety.”

He said he wanted to take this shared passion for the spirit to a larger scale and came up with the idea for World Whisky Day when he travelled to Spain.

“I spent a year abroad studying as part of my degree and while I was in Spain I was amazed by how much enthusiasm there was for whisky.

“I decided that I wanted to incorporate something I am passionate about into my course so I’m doing my dissertation on the Spanish whisky market.

“But I also wanted to bring together people from across the globe with a mutual appreciation for whisky so I looked for a world whisky day and was surprised to find it had not already been established.

“I decided it was something important and wanted to take on the challenge myself. It has been difficult to fit in around my studies but I like to be busy!”

Blair, who also works part-time as a barman in Old Aberdeen’s St Machar Bar, said his first task was to set a date.

“I wanted it to be early in the year as a nice way to beat the post winter blues and March 27 timed nicely as I worked out this was when I’d have tried my first whisky and it is also the birthday of a late whisky writer.

“I turned 18 while visiting America so wasn’t able to have my first drink until the flight home to Scotland.  It must have stuck with me as a good memory as I’ve been fanatical about it ever since.”

Blair is confident that the first ever World Whisky Day will be well supported and already has events registered to be part of the day as far afield as India, the United States, South Africa and even Kyrgyzstan and Lichtenstein.

“I’ve already had messages from people saying they’re planning to open 40-year-old bottles to mark the occasion and a whisky bar in Kuala Lumpur is holding its grand opening on the day,” he added.

“World Whisky Day is about sharing and appreciating the drink with friends – not binge drinking – and will be a great way for those new to the spirit to get involved.

“I’m hoping the day can grow year on year and I’m already looking to 2014 as it is such a significant year for Scotland with the Commonwealth Games in Glasgow and more Homecoming celebrations planned.”