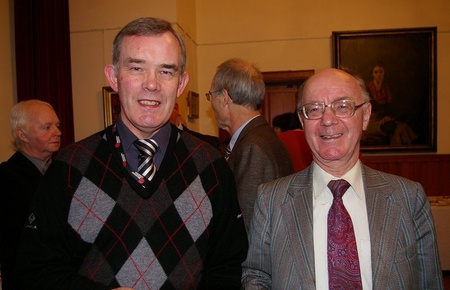 A further forty-seven staff across all parts of the University have been honoured for their long service and dedication to the institution. A total of 160 people have now received awards, including 14 with over 40 years’ service and 146 who have been with the University for over 25 years.

In autumn last year the University launched a long service awards programme in recognition of staff who have achieved more than 25 years and thise who have more than 40 years’ continuous service. Two ceremonies were held in the Linklater Rooms in November, and a third ceremony at the end of January.

The awards have been presented at the three ceremonies by University Principal Professor Ian Diamond, who said: “I am delighted to take this opportunity to show my appreciation to valued colleagues who have given such dedicated service to the University. It is the commitment of our staff that has enabled us to be recognised nationally and internationally for our achievements.“

Picture shows on left Ritchie Reid, a medical scientist in the Institute of Medical Sciences, with Professor Alex Kemp - both of whom have clocked up forty years with the University of Aberdeen.