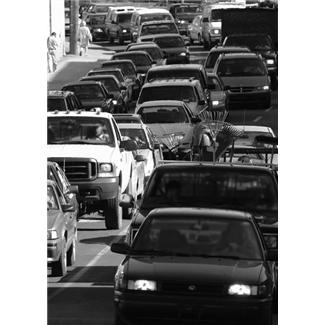 People from Aberdeen city and shire who have recently experienced travel disruption are being asked to share their experience as part of a major new study.

Experts from the University of Aberdeen’s Centre for Transport Research are involved in a £1.2 million research project examining how people react when an incident interferes with their typical travel plans.

This incident could be a major event such as adverse weather, flooding, transport strikes or a terrorist alert or minor occurrences within the family such as a car breakdown, which disrupt normal journey patterns.

Dr Jillian Anable, Acting Director of the University’s Centre for Transport Research explained: “Most studies into travel habits investigate how people typically choose to travel on a day to day basis.

“This study is different in that we are focusing on how people cope when they are forced to make changes to their usual transport choices because of circumstances outside of their control.

“We are asking people who have had recent experience of major or minor events which have interfered with their typical transport choices, to come forward and answer a few simple questions about how they have been affected, how they coped and what measures they had to take.

“Volunteers in the study will be asked to join a small discussion group to talk about these issues.

“These discussions will be held in the week beginning February 27 in the new University library in the early evening.”

Volunteers can also get involved by completing a survey online by visiting https://www.survey.leeds.ac.uk/winterdisruptions/

It is hoped the study will help inform policy makers as to how workplaces, schools and other public institutions could be restructured to avoid putting pressure on the transport network when a major event takes place.

Also, understanding how people react when they are forced to alter their typical travel schedule could help identify how to plan transport services and even encourage people to make more energy efficient travel choices in the future.

Dr Anable said:  “If we can understand how people react when changes to their traditional travel patterns are forced upon them, we can try to understand how we could motivate them to make changes more permanently and choose a more environmentally friendly option for their day to day transport.

“So if for example, a person has a good experience using the local bus service when they are forced to leave their car at home, would this make them more likely to use the bus again in the future?

“Also importantly the study will build a clear picture of the relationship between the transport network and the institutions that generate travel – such as schools, workplaces and retail centres.

“Surveys we have completed in the past have shown, for example, people’s greatest anxiety when faced with wintry weather conditions is not actually the impact on the transport network but the resulting school closures.

“So one of the areas we’ll be looking to understand is how schools could be re-organised to be more flexible in such circumstances- could staff be shared, for example, to keep the schools open?

“The results of this three year project will be fed into a panel of representatives from across industry, education, health and retail to provide advice on how they could work better with the transport system in the future, when a major event causes disruption.”

Further information on the project is available at http://www.disruptionproject.net/

Members of the public wishing to take part in the focus groups should visit contact the University’s Centre for Transport Research on j.anable@abdn.ac.uk or 01224 273795.