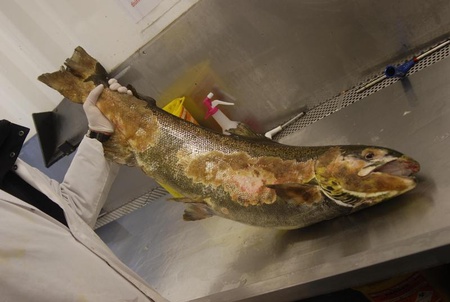 Scientists in Aberdeen have made a discovery which could ultimately help to develop a control for a major cause of infection in farmed fish.

The University of Aberdeen researchers have uncovered a method that a fungus-like organism - which is a big problem for the aquaculture industry - uses to infect salmon and trout.

The disease Saprolegniosis, caused by the water mould Saprolegnia parasitica, is a serious problem for the fish farming industry in countries such as Scotland, Norway, Chile, Japan and Canada.

It is highly pathogenic to fish, extremely difficult to control and is estimated to kill about 10% of all farmed salmon and trout.

Researchers have discovered a route this pathogen takes to infect freshwater fish.

Their findings - published in the Proceedings of the National Academy of Sciences - could help to find new ways of controlling Saprolegnia infections in fish.

They might also yield new clues on how to control similar diseases in plants, as Saprolegnia is closely related to, for example, Phytophthora infestans, the Irish potato famine fungus or late blight, which seems to use a similar tactic to infect potatoes.

Dr Pieter van West, a Reader in Mycology at the University, said: “Saprolegnia, which is found in rivers, lochs and lakes, produces swimming spores that attach to the fish and penetrate its underlying tissue.

“We have discovered that Saprolegnia secretes proteins that are able to enter fish cells by binding to a receptor of a fish cell containing a specific sulphate.

“We still need to work out what the proteins are doing once inside the fish cell, but it is possible that they interfere with the fish’s ability to defend itself against infection.”

The discovery of this tactic may help scientists try to develop new ways of blocking the protein’s actions, possibly controlling Saprolegniosis.

Dr Stephan Wawra, Research Fellow at the University, added: “The method these proteins use to enter host cells may not only be important for infections caused by water moulds, but may also be used by other pathogens. If this turns out to be the case, we would have a good understanding as to how we can block the protein entry process.

“In addition, we might be able to use this method ourselves to deliver possible cures for other diseases, and this is something we will be further investigating.”