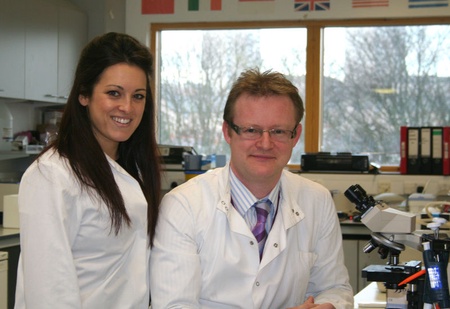 Pioneering cancer research funded by Aberdeen-based charity, Friends of ANCHOR, is being taken to the global stage later this month.

Led by Dr Russell Petty –  the top researcher and clinician in Aberdeen for gastrointestinal cancers, and his research team from the University of Aberdeen and NHS Grampian – the three-year research project has identified ground-breaking findings which could fundamentally change the face of cancer treatment.

Out of 1000 research studies submitted by research fellows across the globe, the North-east team’s research has been ranked the ‘top billed’ presentation by international experts at the upcoming world-leading international conference for gastrointestinal cancers, the American Society of Clinical Oncology Gastrointestinal Cancer Symposium in San Francisco.

Several thousand delegates from around the world will fill the conference to hear Russell and his team report on the fundamental findings from their research which began in December in 2007 and concluded in December last year.

The study involved 40 patients with oesophageal and gastric cancer in NHS Grampian.  The research team used Gene Chip technology to profile the entire genetic information of the patients’ cancers, as well as PET scans to image how metabolically active the tumours were. The study has identified a ’gene signature’ from the tumours that can be used alongside PET scans to predict which patients will and won’t respond to chemotherapy treatment. It also identified some genes which may be useful targets for more effective new drugs in the future.

Dr Petty comments: “These results are an important step towards our goal of individualising and ultimately optimising treatment for each patient. This will help us to move towards a situation where we can ensure that patients avoid any unnecessary treatment that would prove ineffective to ultimately maximise the chances of treatment success in each case.”

A particularly significant finding identified that the expression of the leptin gene in cancers, which is known to play a key role in regulation of body weight, appears to be important in determining whether patients’ cancerous tumours will respond to treatment or not. This evidence clearly indicates a strong correlation between oesophageal cancers and increased body weight and so by identifying more precisely how these two are linked it helps determine how new, more effective drugs for the disease could be developed.

Dr Petty goes on to explain: “Findings, such as the link between oesophageal cancers and increased body weight, has provided us with insights into the reasons why some cancers respond well to treatment and some don’t and why some cancers behave more aggressively than others. Ultimately and most importantly, this provides the foundation for the development of more effective drugs in the future.”

Russell added: “We are incredibly proud and honoured to be able to present our research on such a prestigious, international platform. To be ranked top-billed among 1000 other research studies submitted for the conference is tremendous and we look forward to showcasing the quality of North-east Scotland’s cancer research on the global stage.”

The project was funded by Friends of ANCHOR which directly supports cancer and haematology care in the region through fundraising for the main cancer care facility in the North-east, the ANCHOR Unit at Aberdeen Royal Infirmary as well as cancer research projects taking place at Aberdeen University and the Robert Gordon’s University. This year marks the 15th anniversary of the charity which has invested over £1.5 million into North-east cancer research since the charity’s inception.

Sarah-Jane Milne, PR & Fundraising Manager at Friends of ANCHOR, comments: “We are tremendously proud of Russell and his research team for all the hard work and commitment they put into this hugely successful research project.  To find such significant findings which could significantly improve cancer treatment success is exactly why we are passionately committed to investing in important research taking place by leading clinicians in Aberdeen.“

Russell Petty concludes: “Ultimately, Friends of ANCHOR’s ongoing commitment to research is helping North-east Scotland to lead the way in pioneering new and more effective cancer treatments, quicker diagnosis and ultimately, one day, hopefully finding a cure for this far too prevalent disease.”