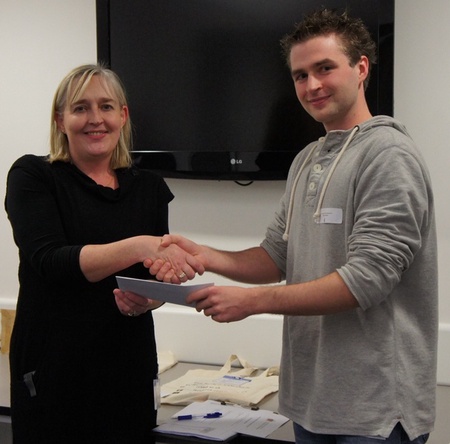 Two medical students from the University of Aberdeen have been shortlisted to participate in the Grand Final of a nationwide surgical skills competition run by The Royal College of Surgeons of Edinburgh (RCSEd) on February 11 to compete for a trip to Johnson & Johnson Medical Companies Skills Centre in Hamburg, Germany.

Third year medical student Nicholas Milliken won the North of Scotland regional heat when he competed against 19 students with an interest in pursuing a career in surgery in four surgical skills tests: knot tying, suturing, hand washing and laparoscopy. Fourth year student Martin Van was the runner-up, but will also go through to the Grand Final after he was selected as the Golden Ticket winner following a random draw of all the runners-up from the competition in the UK.

The Lister Surgical Skills Competition has been organised by RCSEd in association with Johnson & Johnson Medical Companies to commemorate the life and contribution of Lord Joseph Lister, 100 years after his death. A former Fellow of RCSEd, Lister was world-renowned for his groundbreaking work in the prevention of wound infection, which contributed greatly to the advancement of surgical standards and led to Lister becoming known as ‘the father of modern surgery’.

The surgical skills competition has brought medical students from across the UK together to demonstrate their surgical abilities in a series of heats over the last two months, as they attempted to reach the Grand Final of the competition as part of the Lister Centenary Celebrations, which takes place from 9 to 11 February 2012.

Nicholas and Martin and the other UK regional heat winners are being provided with a travel and accommodation package to come to the College for the Final. All participants of the competition have received a year’s student affiliation to RCSEd and, Johnson & Johnson Medical Companies, as the principal sponsor of the Lister Centenary Celebrations, is offering the prize of a trip to its European Surgical Training Institute in Hamburg for the overall winner. The Royal Society of Medicine (RSM) is also awarding the runner-up with free student membership until they qualify as a doctor.

The North of Scotland heat was run by Ms Aileen McKinley, who is one of RCSEd’s Regional Surgical Advisers for the area and a Consultant Colorectal and General Surgeon at Aberdeen Royal Infirmary. Explaining more, she said:

“This competition is a fantastic way of helping aspiring surgeons to identify their ambition early and to meet senior surgeons in a variety of specialties who can support and advise them in the future. All of the students were very enthusiastic, and as well as being very competitive.

“We had 18 students who participated in the North of Scotland heat with supporters from the Ogston Surgical Society turning out too. The Ogston Surgical Society, an undergraduate society, does a great job of supporting medical students interested in surgery. It was great to hear that Nicholas will be joined in the final by Martin.  It was a close competition that went to a tie-breaker, so I am pleased that they both will get to the final.

“Surgery is a very competitive specialty and it is important that students demonstrate their commitment from an early stage in training. The College provides information, courses, careers advice and support right from the beginning of medical school to help with their aspirations. The students already have learned a lot from being in the competition and the trip to the College for the finalists will be a great experience. I know they will be practising their knot tying and suturing in the run up to the competition.  I wish them both steady hands on the day!”

Commenting on the opportunities reaching the Grand Final of the competition will bring, Nicholas Milliken said:

“I think competing in this competition will help my career prospects as it is from a renowned and well known organisation affiliated with surgery. The benefits of affiliating with RCSEdare great - not only do you get the chance to be part of a historical and significantly medical society, but there are also the opportunities that are on offer by the College - workshops and conferences - not to mention this competition, which would otherwise be difficult to gain knowledge about or even attend.

“I feel excited and nervous for the Grand Final of the competition and can’t quite believe I made it through.The doctors in charge were great and very friendly and competing in the regional heat was fun, while challenging. I am really looking forward to the Final and seeing how well I can do against the other competitors.”

“I am very surprised and extremely delighted to have won the Golden Ticket to the Grand Final – it’s a one in 19th chance, literally!  It’s amazing since it was my first ever surgical competition. The atmosphere at the regional heat was great, friendly and relaxed - I didn’t find the different stations too stressful since we have practiced a lot with our surgical society as part of our regular events; however the fact that it was a competition kept me on my toes, I was both nervous and excited simultaneously. It would be simply great to win the competition!”