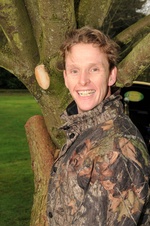 A greater profile and new direction are on the way for one of Aberdeen’s hidden horticultural treasures thanks to a new appointment.

Leading horticulturalist Mark Paterson - who was a key figure at the highly acclaimed Eden Project in Cornwall - has joined the University of Aberdeen to take up the post of Curator of the Cruickshank Botanic Garden.

The 40-year-old whose gardening career has taken him around the world is delighted to be relocating to Scotland.

“The Cruickshank Botanic Garden is the most northerly botanic garden in Britain and it is very special,” said Mark, who is originally from Canada.

“The University of Aberdeen really has a jewel in the crown with Cruickshank and it has decided that now is the time to raise its profile.

“I’ve been given a great opportunity and I’m really looking forward to maintaining and adding to the botanical collection at Cruickshank and working with the horticultural team to develop and extend how the Garden is used.

“It is magical being back in Scotland where my family have a home. Aberdeen is a great city – it has some fabulous public parks like the Duthie Park and its Winter Gardens.

“And the Cruickshank Botanic Garden, neighbouring Seaton Park and the nearby mouth of the River Don are all conservation areas, which is tremendous.

“I’m hoping we can put the Cruickshank Botanic Garden firmly on the map so that even more people can experience its heritage and splendour, after all a garden is inherently a place where the arts and sciences meet.”

Professor David Robinson is Keeper of the Garden and Chair of Plant and Soil Science at the University. He added: “We are delighted that Mark has joined us at the Cruickshank. His appointment as Curator is a significant event in the Garden’s history. We are looking forward to working with Mark to further develop and promote the Garden as an important asset not only to botany, but also to the University and the city of Aberdeen.”

Before moving to Aberdeen, Mark managed the tertiary education programme at Eden and prior to that headed up its 35-strong team of guides.

Mark’s horticultural career has also included spells in Canada, Australia and the Royal Botanic Gardens in Kew, London as well as Threave Gardens in Castle Douglas.