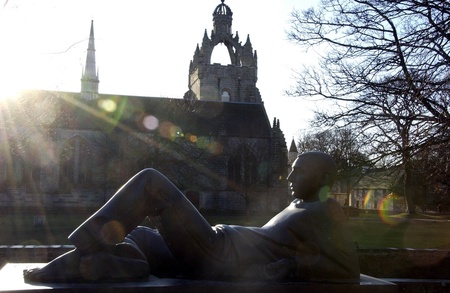 The University of Aberdeen has been ranked top university in Scotland for scientific collaboration with other academic institutions, in a new league table.

The Leiden Ranking 2011/2012 places the University second in the UK in this field, behind only the London School of Tropical Medicine.

In addition to a second place ranking for general collaboration, the University of Aberdeen is placed sixth in the table which measures specifically international collaboration.

The Leiden Ranking, produced by the Centre for Science and Technology Studies (CWTS) of Leiden University, aims to provide highly accurate measurements of the scientific impact of universities, and of universities’ involvement in scientific collaboration as measured by research published, and referred to, in scientific journals.

The ranking system measures the scientific performance of 500 major universities across the globe and ranks them accordingly, using a sophisticated set of bibliometric indicators.

Professor Ian Diamond, Principal and Vice-Chancellor of the University of Aberdeen, said “We are delighted to see these rankings reflect our commitment and success in working with other universities in the UK and across the world on scientific research which will have a major impact on the lives of communities across the globe.”