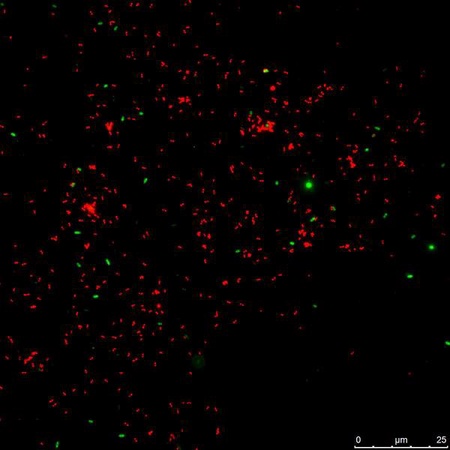 Scientists at the University of Aberdeen have shed new light on a century-old gap in our understanding of how ammonia-based fertilisers are inactivated by microorganisms in soil.

Organisms that oxidise ammonia were first discovered in 1890. Although a natural process, a major consequence of the activities of such organisms in soil is the transformation and loss of nitrogen fertilisers used to improve crop production, resulting in groundwater and atmospheric pollution.

Over the past hundred years, all the strains cultivated have only grown in standard laboratory conditions at higher, neutral pH, and not in acidic conditions.

In two separate papers published recently in the journal Proceedings of the National Academy of Sciences USA, research performed at the University of Aberdeen has identified a novel organism which performs the process of ammonia oxidation in acidic conditions, and has also demonstrated that this organism is abundant and globally distributed in acidic soils.

A large part of this work involved the analysis of soils from the Scottish Agricultural College’s Craibstone Estate outside Aberdeen, where their long-term pH gradient soil plots represent one of the few long-term experiments of its kind in the world and an extremely valuable resource for looking at the activity of organisms in soil.

To recognise the importance of the site from which the organisms were obtained, and the university at which the microbe was first cultivated, the new organism has been named Nitrosotalea devanaterra, which means an ammonia-oxidising ‘rod’from soil in Aberdeen, incorporating Devana, the Roman name for Aberdeen. It is part of the Domain of microbes known as Archaea.

The research team has now been awarded a £0.5 million, 3.5-year research grant by the Natural Environment Research Council to investigate the highly unusual physiology of Nitrosotalea devanaterra and to find out more about its potential role in the loss of ammonia-based fertilisers and nitrous oxide gas emissions from soil.

Billions of pounds are spent annually on nitrogen fertilisers to support crop production to feed the world’s population. Predicted population growth in the next 50 years will require double the amount of fertiliser used globally. Much of this fertiliser is based on ammonia but unfortunately more than half of this is lost to agriculture through the activities of soil microbes. These ‘ammonia-oxidising’microbes rapidly convert ammonia to nitrate, which is washed out of the soil before it reaches crops for which it is intended. This leads to losses to farmers estimated at over $15 billion per year and nitrate-polluted drinking water. Ammonia oxidisers are also responsible for production of nitrous oxide, a potent greenhouse gas that contributes to destruction of the ozone layer.

In 2005, novel ammonia oxidisers were discovered that belong to the Archaea, an ancient evolutionary lineage of microbes that are distinct from bacteria, plants and animals. These organisms were previously thought to grow in ‘extreme’environments, with very high temperature, high salinity or low oxygen concentration. However, the past decade has shown that Archaea, including ammonia-oxidising Archaea, are highly abundant in the biosphere, with 10 million archaeal cells typically found in every gram of soil. Professor Jim Prosser and Dr Graeme Nicol at the University of Aberdeen have been studying these organisms in soil for over a decade, and have been investigating whether the Archaea could be the missing link in this essential biogeochemical process in acid soils.

The Aberdeen scientists decided to investigate whether microbes belonging to the Archaea might be responsible for this oxidation in acidic conditions, rather than the bacteria. To determine whether ammonia-oxidising Archaea can grow under acidic conditions, Laura Lehtovirta, a postgraduate student in Prosser and Nicol’s group, attempted to grow these organisms in acidic laboratory growth medium.  Soil from a long-term pH gradient soil experiment at the SAC’s Craibstone Estate was inoculated into this medium and, after many months, they obtained the first obligately, acidophilic (acid-liking) ammonia oxidiser. They then showed that its growth and activity were directly responsible for ammonia-oxidation in acidic soil.

In a separate study, postdoctoral researcher Dr Cecile Gubry-Rangin from the same research team used state-of-the-art sequencing technology to demonstrate that this organism is also dominant in acidic soils throughout the world. This research has enormous implications for global fertiliser losses and, potentially, nitrous oxide production in agricultural soil.

Cultivation of an obligate acidophilic ammonia oxidizer from a nitrifying acid soil.

Proceedings of the National Academy of Sciences USA, 2011, In press.