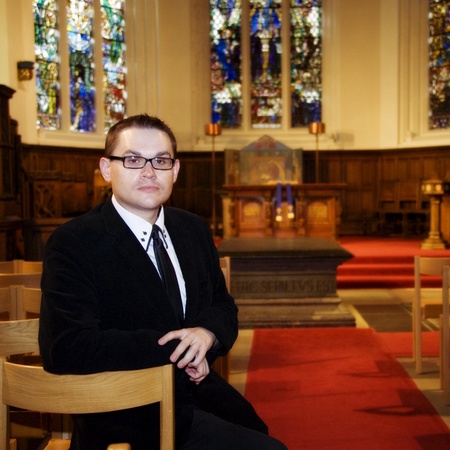 Aberdeen’s Paul Mealor has become the first composer to top both the classical and pop charts at Christmas.

His work for the Military Wives choir has beaten off competition from X-Factor winners Little Mix to hit the number one spot on Christmas Day.

The University of Aberdeen Professor in Composition penned the piece, Wherever You Are, for the ensemble, whose progress under the tutelage of Gareth Malone from novices to a harmonious group was charted in the BBC 2 series The Choir.

Since the programme aired in November, a strong campaign has grown to ensure that their charity single in aid of the Royal British Legion and SSAFA (Soldiers, Sailors, Airmen and Families Association) Forces Helpwould secure top spot at Christmas.

Today (December 25) Wherever You Are topped the UK singles chart, while Professor Mealor’s Album, A Tender Light, remained in the number one spot in the Specialist Classical Album chart for a sixth successive week.

The double success rounds off a remarkable year for the composer who saw his profile rocket in April when his work Ubi caritas was chosen for the Royal wedding.

He then became involved with The Choir through a chance meeting with Gareth Malone at the Classical Brit Awards where the choirmaster asked if he could write a piece for women’s voices.

“I had to tell him that I’d never written anything solely for female voices,” he said “but I was intrigued by the project – it sounded such a wonderful idea to bring military wives together in this way – so I offered to compose something new.”

Professor Mealor said he was presented with a double challenge – to write music for a choir without bass and to come up with words which would capture the feelings of the women from the tri-service RMB Chivenor in North Devon, whose husbands had just embarked on a tour of Afghanistan.

“I was concerned that I wouldn’t be able to convey the depth of their emotions through a normal poem or lyrics, so Gareth suggested asking the members of the choir to come up with the words themselves.

“They then sent me letters and poems they had written to their partners while they were away. They were very personal and deeply moving and so I created a poem using a collection of their own words.”

Professor Mealor said he believes it is because the words are so heartfelt and personal that the song captured the public imagination and a campaign was launched to get the charity single to the number one spot for Christmas.

“I’m so grateful that they shared their letters with me, as there is no way I could have come up with the poem myself. It has so much more meaning as a result and you cannot fail to be moved by lines such as 'Wherever you are, my heart will keep you safe, My love will build a bridge of light across both time and space'.

“It was an honour just to be involved with the project but to have made Christmas number one in a pop chart is something that as a classical composer, I never imagined could happen – let alone at the same time my own album is sitting in the top spot in the specialist chart!”

Professor Mealor said the double ‘number one’ rounded off a year he would never forget.

“2011 has been incredible for me!” he said. “I still have to pinch myself in the mornings to make sure I'm awake. I never thought, after the Royal Wedding, that I would be involved in something so important again, but The Military Wives and Gareth Malone have taken the Nation's hearts by storm!

“I'm so proud and humbled to have written this song which seems to have broken all sorts of records and brought many people joy and peace at Christmas.

“As a composer you want to share your music and to have secured a double number one, particularly at Christmas, is truly amazing.”