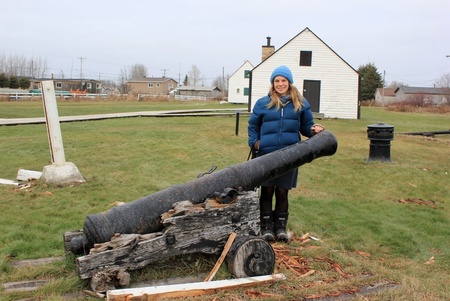 A University of Aberdeen musicologist has just returned from the wilds of Canada where she has spent the last eight weeks researching how the fiddle traditions of the North-East and Orkney made their way across the world.

Dr Frances Wilkins, a visiting lecturer in ethnomusicology and Scottish music, examined the role played by the Hudson’s Bay Company in transporting traditional music to Canada.

Her interest in Scottish fiddle music began when she moved to Shetland in the 1990s.

“The fiddle was often played on board boats at sea,” said Dr Wilkins, “This was particularly common in the whaling industry where almost every ship had a fiddler to entertain the crew.”

“The Hudson Bay Company also had a fiddle tradition aboard their boats which transferred to trading posts across Canada.”

Dr Wilkins spent time in two Cree Indian reserves in the remote James Bay area where she found a particularly strong musical exchange between Scotland and the Cree community.

“The region was really cut off from the outside world until around the 1930s apart from the Hudson Bay Company ships.

“They have a very specific style of music and dancing, and I was looking at how that might have taken root in the area and evolved over time.

“You can clearly see a strong Scottish influence with many connections to Orkney and the North-East.  Most of the crew on board the boats were drawn from the region and many took ‘local wives’ and started families during their time in James Bay, some remaining in the country after their contracts had expired.

“As a result there are a number of familiar surnames such as Sutherland, Sinclair and Linklater. Before I left for Canada I wasn’t sure how strong the musical connection would be but I was pleasantly surprised to find it still remains strong.”

To conduct her research Dr Wilkins travelled to some of Canada’s more remote regions where temperatures dropped as low as minus 33 and she became accustomed to some unusual methods of transport.

“I went to an area of Hudson Bay called Moose Factory where they use ski-doo taxis. The ski-doo has a covered sleigh attached to the back of it where I sat and looked out behind me while I was being towed down the river.

“It was quite a bumpy ride, and I could see areas around me where the ice was stacking up on top of the river – it was quite an experience!”

Dr Wilkins intends to return to Canada for further research and in the New Year will create an exhibition of her findings in the University’s MacRobert Building café. This will be launched in early March 2012.