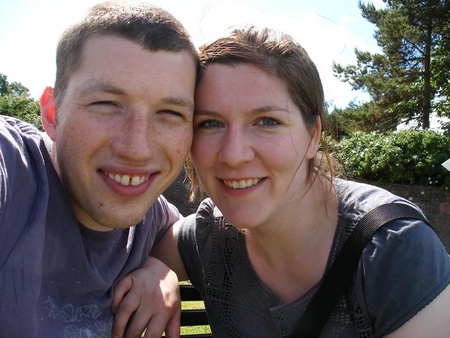 A craft club at the University of Aberdeen has raised £627 for the neurology ward at Aberdeen Royal Infirmary which is treating the fiancé of one of its members.

Nick Hayward, who is a PhD student at the University, has been in and out of ward 40 over the last three years, for treatment for a non-cancerous brain tumour.

Despite undergoing a second round of surgery earlier this year, Nick has made such good progress he is about to successfully complete his PhD.

The Craft Club wanted to celebrate his achievements by giving the money from their first sale of work to the ward where Nick is being treated.

Nick’s fiancée Emma Morrison is one of the members of the craft club which meets at the University’s Institute of Medical Sciences (IMS).Founder club members Margaret Fraser, Laura Selway and Linda Key said: “We were delighted to raise so much money for the neurology ward where Nick has spent a lot of time.

“Now we would like to thank everyone who donated items to sell and those who supported us by buying things.

“As our first sale was so successful we are now planning on making it an annual event.

“We are also having a craft sale around Easter when we plan to raffle the patchwork quilt that we are currently making as a group effort – again the proceeds will go to Ward 40.”

The club, which meets on Tuesdays between 5pm and 6.30pm in the level 2 meeting room at the IMS, is looking for new members.

“We are hoping that other people with skills will join our group and demonstrate their skills to others.

“In the New Year we are going to have a demonstration of spinning wool and we are always looking for new things to feature at our club.”