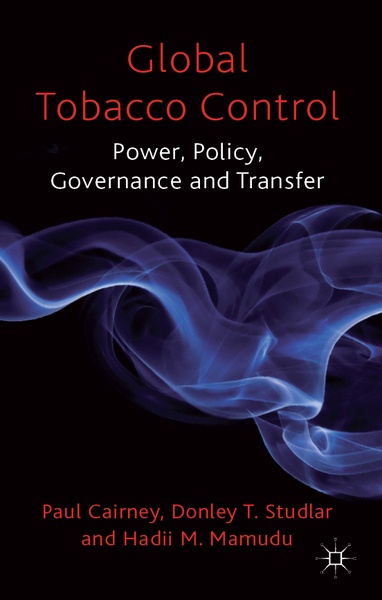 The health problems associated with tobacco are now well known and similar across the world, but the policy responses by each country have varied in intensity, timing and effect.

Now a new book, co-authored by the University of Aberdeen's Dr Paul Cairney, charts in detail the tug-of-war between public health and the tobacco industry that has occurred over the past half century.

Global Tobacco Control: Power, Policy, Governance and Transfer is the first major book by political scientists explaining global tobacco control policy. It identifies a history of minimal tobacco control then chronicles the extent to which governments have regulated tobacco in the modern era.

The book identifies major policy change from the post-war period and uses theories of public policy to help explain the change.

Dr Cairney said: "We hope that by setting out the changes and differing responses of nations since the late 19th century we can help practitioners to understand how and why public health has succeeded and that this can be used to think about and act in the future.

"This is not a study which seeks to make normative judgements. Instead, it establishes how and why tobacco policy has changed here in the UK and across the globe."

Dr Cairney said that the time it took for change to occur demonstrates a significant 'lag' between developing medical knowledge and a change in legislation.

"We found something like a 20 to 30 year gap between production of scientific evidence and happening significant reaction by policymakers," he added.

"For example the evidence that tobacco can cause cancer began to be produced in the 1950s but it was not until the 1980s that any serious regulation started to take place. Similarly, scientists have warned of the dangers of passive smoking since the 1980s but a smoking ban didn't take place until mid 2000s.

"Across the globe, it now looks inevitable that tobacco will become more and more strictly controlled but that is a judgement based on the experience of the 'developed' world and what we have learned in that period.

"We hope that by producing a comprehensive study of how this came about and identifying the factors necessary for change the book can provide a basis for politics, policy analysis and public health in nations at differing points in the regulation of tobacco."

Global Tobacco Control: Power, Policy, Governance and Transfer is published by Palgrave and is available to order online at http://www.palgrave.com/products/title.aspx?pid=283937

PAUL CAIRNEY is Senior Lecturer and Head of Department, Politics and International Relations, University of Aberdeen, UK. His interest in tobacco policy was sparked by research into public policy in the devolved UK. He is the author of Understanding Public Policy: Theories and Issues (Palgrave).

DONLEY T. STUDLAR is Eberly Family Distinguished Professor of Political Science at West Virginia University, USA. He has published four books and over 125 articles on comparative politics in journals all over the world. His previous book on this topic is Tobacco Control: Comparative Politics in the United States and Canada.

HADII M. MAMUDU is Assistant Professor of Public Health at East Tennessee State University, USA, where he researches tobacco control. He is the author of The Politics of the Evolution of Global Tobacco Control: The Formation and Functioning of the Framework Convention on Tobacco Control.