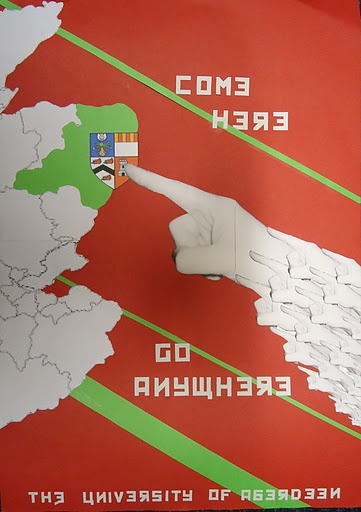 Third year History of Art Honours students have taken on the role of curators and artists to exhibit their Soviet avant-garde inspired posters.

Students were given the assignment to create posters in the style of Soviet avant-garde poster artists, such as El Lissitzky, Gustav Klucis and Alexander Rodchenko.

They were asked to design posters to advertise aspects of the university and to address the question ‘Can the style of Soviet advertising be taken out of its context and used in contemporary advertising?’.

This then formed the basis of the exhibition. Student opinion on the issue was divided with some supporting the style as an effective style for advertising, while others felt that the negative connotations of Soviet propaganda still resonate.

Dr Amy Bryzgel, lecturer for the course, said: “The students created their own advertisements by combining photographs, graphics, and text, in the same manner that the Soviet artists did. The result was a series of very dynamic images that capture the essence of the University, from a student’s perspective.

“I hope that these practical skills gained through the project will be of use to the students in future, after they finish their studies.”

The free exhibition in the James MacKay Hall, King's College Conference Centre is now open. The posters will remain on display until March 1 2012.