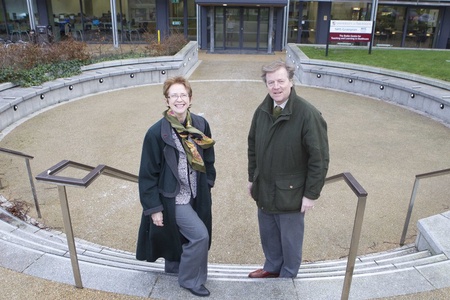 The Suttie Centre, which educates new doctors and provides further training for healthcare staff at all stages of their careers, has been given a significant boost through a project led by Charles Pearson, owner of Dunecht Estates in Aberdeenshire.

More than £150,000 was raised which has seen the establishment of external garden space attached to the Centre. The donation has created a true heart for the facility, which is used by many staff and students and also visitors and patients from the wider Foresterhill site.

The gift to the Suttie Centre was made after Charles Pearson donated East Brachmont Steading at Durris, part of Dunecht Estates to Aberdeen University’s Development Trust. The Steading was then sold for residential conversion. Banchory based estate agents Strutt and Parker contributed to the project by marketing and selling the property free of charge.

The Pearson family have a long association with Aberdeen, the University and healthcare.

Charles Pearson’s great grandfather, Weetman Dickinson Pearson, 1st Viscount Cowdray (15th July 1856 -1st May 1927) was an engineer, oil industry pioneer and owner of S Pearson and Son (later to become Pearson plc). He made substantial donations to a number of universities including Aberdeen and to hospital provision within the city. Lord Cowdray also served as Lord Rector of Aberdeen University for three years between 1918 and 1921.

Along with a small number of eminent local families, he provided funding to help establish the Foresterhill hospital site, which has developed into one of the largest single site teaching hospitals. His wife Lady Cowdray gave substantial support to the Aberdeen branch of the college of Nursing. In recent years Charles Pearson’s charitable trust (The Demigryphon Trust) made a significant donation to the new Royal Aberdeen Children’s Hospital.

Charles Pearson said: “The continuing development of the medical teaching faculty at Aberdeen University is important not only to Aberdeen and the North East but ultimately through its teaching and research achievements to the wider global community.

“I am delighted to have been able to contribute in a modest way to this exciting project of renewal while continuing our long family tradition of supporting the University and health care in the region”.

Professor Neva Haites, Vice-Principal for Development at the University of Aberdeen said: “The garden space which has been created at the Suttie Centre is proving very popular not only with people using the Suttie Centre, but also with patients, family and staff working in the hospitals of the Foresterhill site, with which the Pearson family has such a long association. The garden offers a relaxing, peaceful space to get away from the bustle of the clinic or ward.”

The Suttie Centre was opened in 2009 and is a joint NHS/Aberdeen University project.

The centre is a popular, thriving building, averaging 1,000 visitors per day. As well as organised teaching, training, conferences and events, there are spaces for more ad-hoc activities and the café is a popular venue for staff, students, patients and visitors to the Foresterhill site.