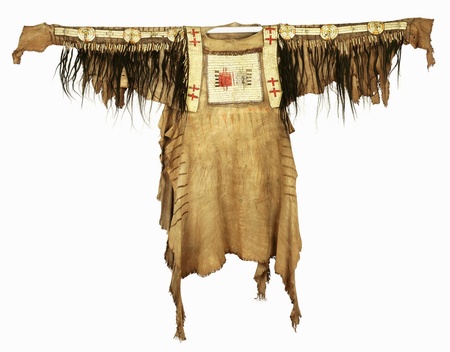 An Aberdeen anthropologist has won a prestigious prize for her museum work with First Nations and Native American people from North America.

The prize is in recognition of research conducted alongside Dr Laura Peers, a reader in Material Anthropology and curator of the Americas collections at the Pitt Rivers Museum, University of Oxford, and Ms Heather Richardson, the museum’s head of conservation, for their collaborative ‘Blackfoot Shirts Project’, which brings together historic collections in the United Kingdom with Blackfoot people in Canada and the United States.

Building on relationships developed first by Dr Brown during her doctoral research in the late 1990s, the team developed a project to lend five early nineteenth century shirts from the Pitt Rivers Museum collection to the Glenbow Museum in Calgary and the Galt Museum and Archives in Lethbridge, Alberta, Canada, both of which are located in traditional Blackfoot territory.

The five shirts are nearly 200 years old. They were collected in 1841 by Sir George Simpson, the governor of the Hudson’s Bay Company, and given to his secretary, Edward Hopkins.

Dr Brown explains: “The shirts have been in the Pitt Rivers Museum since 1893 but prior to the project only a handful of Blackfoot people had seen them. As most surviving Blackfoot clothing from this period is now in museums in Europe, Blackfoot people are keen to access these materials so they can learn about the skills and techniques used by their ancestors.

“The shirts are made from elk and deer hide and three are decorated with porcupine quill embroidery, hide fringe, and strands of horse and human hair. The quillwork designs are related to Blackfoot sacred stories and one shirt has also been painted with the war records of its owner.”

The project was developed in partnership with Blackfoot people, several of whom travelled to the UK to plan the project and discuss its impact with staff in British museums.

Before going on display, the shirts were studied by more than 500 Blackfoot youth, teachers, ceremonial leaders, elders, and artists from all four Blackfoot Nations: Siksika, Piikani, Kainai in Alberta, Canada, and the Blackfeet in Montana, the United States.

Dr Brown said: “One of the aims of the project was that people would use the shirts to talk about  Blackfoot cultural and historical knowledge. It was also hoped that accessing the shirts would stimulate interest in porcupine quillwork, the making of shirts, and the cross-generational transfer of knowledge.

“People quickly moved beyond these goals, recognising these shirts as visits from Blackfoot ancestors.

Dr Peers added: “Every time we uncovered the shirts, people gasped audibly. Some people were so in awe at the power of the ancestors come home to visit their grandchildren that they cried when they saw them.

“Tribal members chose to revive the ceremony to ritually transfer the right to own hairlock shirts. Teachers in two different communities brought in artisans to teach traditional hide tanning and quillwork to high school students, and students who tried on replicas of these shirts felt a surge of cultural pride.”

The shirts are now back in the Pitt Rivers Museum, but the project team has created a website that includes lesson plans written by Blackfoot teachers, as well as historical and conservation information on the shirts and are writing a book with Blackfoot colleagues about the project and its impact.

Dr Brown added: “We are delighted to have received this award as it recognises the support of the many people across the four Blackfoot nations as well as in our partner museums and our own academic institutions who worked so hard for so many years to bring the project together.”