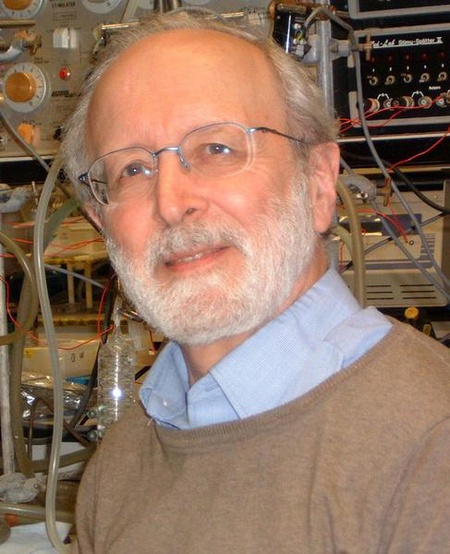 A University of Aberdeen pharmacologist will next week (December 14) be awarded a top medal for his outstanding contribution to pharmacology.

Professor Roger Pertwee, an internationally recognised cannabinoid scientist of the University’s School of Medical Sciences, is the 19th recipient of the Wellcome Gold Medal, presented every two years by the British Pharmacological Society.

Of the previous Medal recipients, three have been Nobel Prize winners and 16of those awarded - including Professor Hans Kosterlitz of the University of Aberdeen who received his medal in 1987 - have been Fellows of the illustrious Royal Society.

Roger Pertwee, Professor of Neuropharmacology, said: “I feel delighted and very honoured to have been given this medal by such a prestigious society, especially because it relates to pharmacological achievements, in my case mainly in the area of cannabinoid pharmacology.

“My research group is currently focusing on the greatly understudied pharmacology of some of the many unique and fascinating compounds called phytocannabinoids that are produced by cannabis.

“The main objective of this pharmacological research is to identify potential new therapeutic uses for phytocannabinoids, some of which can already be prescribed by doctors to reduce cancer pain or the spasticity and pain of multiple sclerosis.

“Just some potential new uses we have recently discovered are for the treatment of certain liver disorders, Parkinson’s disease, stroke and drug dependence.”

Professor Pertwee’s work builds on pharmacological research on phytocannabinoids that he began at Oxford University in 1968 and continued when he moved to Aberdeen in 1974.

“We are also investigating the pharmacology both of synthetic cannabinoids and of endocannabinoids - these are chemicals produced naturally by our own tissues to reduce the severity or unwanted effects of disorderssuch as multiple sclerosis, Parkinson’s disease, schizophrenia, post-traumatic stress disorders, intestinal inflammatory disorders, atherosclerosis and cancer,” said Professor Pertwee.

“Endocannabinoids display some of the pharmacological actions of tetrahydrocannabinol, the main psychoactive constituent of the plant cannabis, which is responsible for the ‘high’ that cannabis can produce.”

Their finding is paving the way for the development of better medicines for moderating the progression or symptoms of certain disorders.

Roger Pertwee has three degrees from the University of Oxford: MA (in biochemistry), D.Phil. (in pharmacology) and D.Sc. (in physiological sciences). He is Professor of Neuropharmacology at the University of Aberdeen, Director of Pharmacology for GW Pharmaceuticals, co-chairman of the International Union of Pharmacology (IUPHAR) Subcommittee on Cannabinoid Receptors, a co-ordinator of the British Pharmacological Society’s Special Interest Group on Cannabinoids, and visiting Professor at the University of Hertfordshire. He has also served as chairman of the International Association for Cannabis as Medicine (IACM; 2005-2007) and as President of the International Cannabinoid Research Society (ICRS; 1997-1998; 2007-2008) and is currently ICRS International Secretary and a member of the IACM board of directors. He was the recipient of the 2002 Mechoulam Award “for his outstanding contributions to cannabinoid research” and in 2005 was recognised asan “ISI Highly Cited Researcher”.