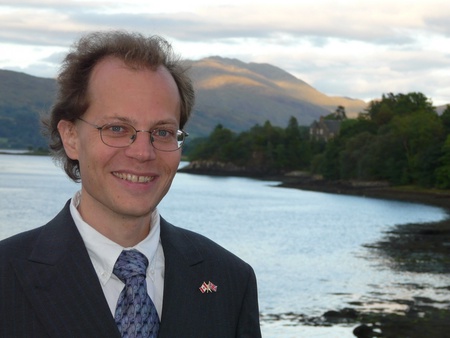 It is found in the screen of your mobile phone, computer monitor and in your LCD TV. Traditionally, it is best known as a disinfectant, but it is also used in x-ray contrast media and is critical for human health.

It is iodine and it was accidentally discovered 200 years ago by a French chemist as he and others hunted for new raw materials to make explosives.

And iodine has never been more important than it is today as leading researchers, including Professor Frithjof Kuepper, who has just joined the University of Aberdeen’s Oceanlab, explain in an article about the chemical element published in international science journal Angewandte Chemie to mark the bicentennial anniversary of its finding.

Professor Kuepper, an expert on seaweed chemistry and biodiversity, said: “Iodine was discovered by chance in November 1811 when Europe was embroiled in the Napoleonic wars.

“The British had imposed a naval blockade against French-occupied continental Europe, and the French were running short of raw materials for gun powder, and so their chemists started looking for innovative sources of nitrate.

“One of them, Bernard Courtois, tried extractions from seaweed ashes. His research did not yield the desired results. But it did lead to the discovery of iodine as a brand new element when Courtois observed an attractive violet vapour arising from his flasks.”

In their journal article Professor Kuepper and the international consortium of researchers detail the finding and many subsequent uses of iodine, which is produced on a large industrial scale, mainly in Chile and Japan.

“Iodine impacts on many aspects of life on Earth and on human civilisation,” said Professor Kuepper.

“It accumulates in high concentrations in marine algae, which, in turn, impacts on the coastal atmosphere and climatic processes. And, of course, iodine is also vital for healthy thyroid function in vertebrates, with paramount importance for human health.

“I think most people will be aware that iodine has been, and still is, used as a disinfectant. However its applications are much wider and even more significant than that.

“It has an important role in the marine environment; it is used in the chemical industries for organic synthesis and advanced materials; it is applied in pharmaceuticals and iodine is used in the LCD screens of computers, mobile phones and TVs.

“It is also used in x-ray imaging media and in innovative materials, such as semiconductors and last-generation solar cells.

“Finally, radioactive iodine isotopes are infamous for their role as environmental and health hazards in nuclear tests and accidents such as the latest one in Fukushima.”

Professor Frithjof Kuepper, Chair in Marine Biodiversity, who joined Aberdeen from the Scottish Association of Marine Science in Oban, will continue his research into iodine, as well as carrying out work into seaweed chemistry and biodiversity.

The Professor, originally from Germany and who has previously worked in France and the USA, is pleased to have joined the University of Aberdeen where he already has existing research links.

He added: “The University of Aberdeen is a fantastic place, full of opportunities to further develop my research area.

“I am particularly attracted by the innovative, interdisciplinary climate, where marine science thrives alongside a range of life science and chemical disciplines.”

Professor Frithjof Kuepper is available for interviews. To arrange, contact Jennifer Phillips on 01224 273174.