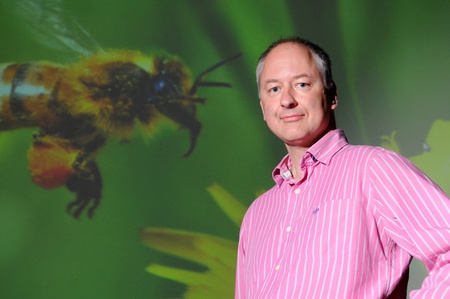 A University of Aberdeen scientist has scooped a Glenfiddich Spirit of Scotland award for his pioneering work which could halt the global decline of the honey bee.

Dr Alan Bowman was last night (November 29) named winner in the environment category of the prestigious awards, now in their 14th year.

Nominees for the scheme are ‘individuals who exceed all expectations in their chosen fields and are pioneering new developments across Scotland’s rich cultural spectrum’.

Dr Bowman was shortlisted for the environment category by a judging panel as a result of his research into a non-pesticide method of controlling the varroa mite which is threatening bees worldwide.

He was selected as winner of the category by public vote and presented with his award at a ceremony held at the Mansfield Traquair, Edinburgh.  This award follows on from Dr Bowman’s inclusion in the men’s magazine Esquire’s “20 men to shape the world” earlier in the year

Dr Bowman said he was delighted to receive the award: “It came as a shock to be nominated but I’m delighted that the work conducted at the University of Aberdeen and with the National Bee Unit has been recognised in this way.

“Bee research is incredibly important as bees are essential to food production – it is said that every third fork full of food we put into our mouths is in some way dependent on bees.

“Varroa mites are a real threat to bees as they transmit diseases, especially viruses, and a hive that has varroa mites will not survive more than two years unless there is some intervention by the bee keeper.

“We have developed something called ‘gene knockdown’ which harnesses the varroa mites own immune system to start attacking itself and to turn in on its own genes, killing the mite.

“We have been successful in demonstrating this in a laboratory setting and are hopeful we can progress to take out to field to help protect the bees against the varroa mite.”

Dr Bowman was among prestigious company when presented with the awards by Kirsty Wark.  The winners in other categories include Dr Gordon Rintoul, Director of National Museums Scotland, who won the Top Scot award for leading the renovation of the Chambers Street museum, Karen Gillan, of Doctor Who fame who won in the screen category, novelist, playwright and performer Alan Bisset who won in the writing section, and David Paul Jones, composer, vocalist and pianist, who took the music award.