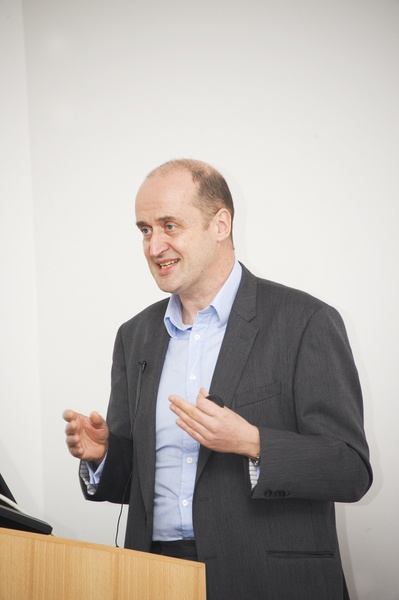 Leading genetic engineer Dr John McCafferty visited the University of Aberdeen to give a seminar on his research and to meet University researchers, students, representatives of local biotech companies and the Scottish Life-Science Association.

Dr McCafferty, who is Cambridge based,  is a major player in the fight against diseases such as arthritis, auto-immune disease and cancer.

He was one of the founders of a spin-out company from Cambridge University called Cambridge Antibody Technology Ltd, now known as Medimmune after being acquired by AstraZeneca.

He was also the principal inventor of a technology called antibody-phage display, which allows selection of antibodies from large “libraries” of billions of different human antibody clones from the test-tube to the patient.

Professor Andy Porter and Dr Soumya Palliyil , antibody engineers at the University of Aberdeen, told Dr McCafferty that they were delighted with the formal collaboration they have with Dr McCafferty’s group at Cambridge, which is aiding research into diseases such as cancer, infection, heart disease and liver disease.

Dr McCafferty added: "Aberdeen and Cambridge have a long history of working together in antibody technology, I am delighted and excited about broadening this working relationship with scientists based at the SULSA Scottish Biologics Facility to make antibody technology more widely available across the entire Scottish academic research community."