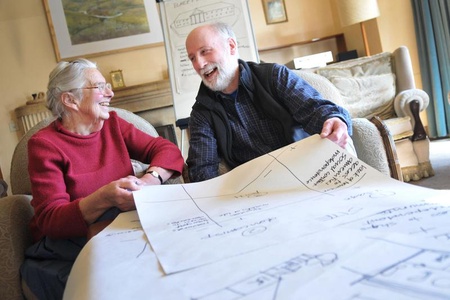 A project led by the Centre for Rural Health, a research unit involving the University of Aberdeen and the University of the Highlands and Islands, which looked at the role of older people in rural life, and helped to devise community support schemes, has been nominated for a major European Commission award.

The O4O: Older People for Older People scheme, which investigated ways to enable older people to live happily and healthily in their homes and communities, as well as making a strong contribution to community life,  has been shortlisted for a RegioStars award which identifies original and innovative projects which could be attractive and inspiring to other European regions.

O4O helped a community group to form and take over the running of a care centre for the elderly in Lochinver, Assynt, and engaged senior citizens in Ardersier, near Inverness, to make a film of their memories, among other initiatives in the Highlands. It empowered older people to identify their needs and supported them to develop a variety of social organisations to meet those needs in order that they, and other older people, might continue to live healthily and happily in their own homes and communities for longer.

O4O project manager Kate Stephen said: “This is fantastic recognition for a marvellous project which has brought communities together and shown what they can do. We have helped to demonstrate that older people are a proactive and energetic force to enliven and support remote and rural communities, and can remain in their home areas if residents help each other.”

James Fraser, University of the Highlands and Islands Principal and Vice-Chancellor congratulated the O4O project team, saying: “It is gratifying to receive such distinguished acknowledgment for this important work. The European Commission's RegioStars annual awards highlight the most innovative projects which have been supported by European Regional Policy. And it is testament to the tangible difference this O4O project has actually made to the older people in our rural communities in the Highlands and islands, that it has been shortlisted from over 100 entries.”

The project was funded by the Northern Periphery Programme and the European Regional Development Fund (ERDF) and there were partners in Finland, Sweden, Greenland, Northern Ireland and Dumfries and Galloway.

Although the project is finished, the services developed by older people in the rural communities involved continue. The experiences and learning established during the project have been captured and presented in the O4O Toolkit - a 'manual' which will enable the start-up of O4O-type services in further communities throughout the Northern Periphery and beyond.

Winners will be announced at a ceremony in Brussels in June 2012.