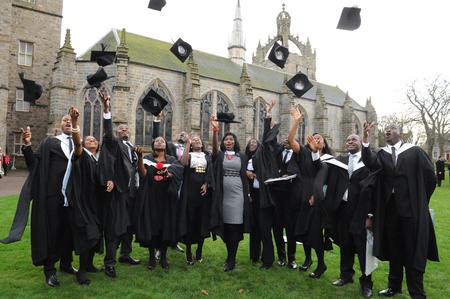 A religious leader, opera singer, pharmaceutical entrepreneur, renowned scholar and charity champion were among those recognised with honorary degrees from the University of Aberdeen this November.

Lord Sacks has been the Chief Rabbi of the United Hebrew Congregations of the Commonwealth since 1991. He is a  frequent contributor to radio, television and the national press, and has also been a visiting professor at several universities in Britain, the United States and Israel.

Dame Hazel is Dean of Laws, Professor of Socio-Legal Studies and co-director of the UCL Judicial Institute in the Faculty of Laws at University College London, where she is also an Honorary Fellow.   A Fellow of the British Academy, she was awarded the US Law and Society International Prize for distinguished scholarship in 2005.  She has also been a member of the Judicial Studies Board for 12 years, contributing to the training for the judiciary at all levels.

Jennifer Anne Shirreffs MBE, an Aberdeen graduate who has been a prominent volunteer and contributor to the charitable sector in the Granite City over many years will be made a Master of the University. She has dedicated her time to the voluntary sector for more than 30 years, holding posts a dozens of charitable organisations including the Royal Society for Prevention of Cruelty to Children (now Children First), Aberdeen and NE Deaf Society, the Royal National Institute for the Blind, Grampian Epilepsy Appeal, Aberdeen Performing Arts, and the Aberdeen and North East of Scotland School of Music, among many others.

In celebration of his contribution to music the internationally acclaimed Welsh baritone soloist and opera star, Jeremy Huw Williams, became an honorary Doctor of Music. Since making his debut with Welsh National Opera as Guglielmo in Cosi Fan Tutte the celebrated baritone has appeared in over sixty operatic roles. He has given performances at major venues in North and South America, Australia, Hong Kong, and most European countries

A Doctor Honoris Causa was awarded to Michael Wyllie, a Director and Founder of Global Pharma Consulting. A double graduate of the University of Aberdeen he has over 30 years of experience in senior management positions in the pharmaceutical industry. He is Chairman of Glycomar Ltd, the Oban-based marine biotechnology company and a member of the University’s Kosterlitz Centre for Therapeutics advisory board. Dr Wyllie is named inventor on over 100 'method of treatment', formulation and device patents.

Principal and Vice-Chancellor of the University, Professor Ian Diamond said: “The University of Aberdeen is proud to honour these exceptional individuals who have achieved greatness in their respective fields.

“In each of their distinguished careers they have embodied the qualities, values and passion required to make it to the top of their professions. They provide inspirational examples for our graduands who will celebrate their own achievements in graduating from the University.”