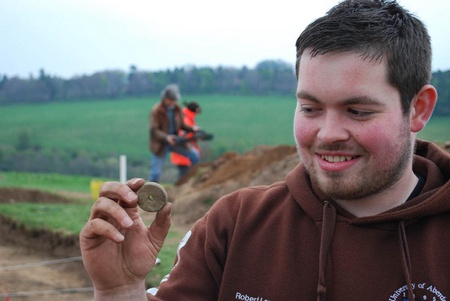 An excavation has revealed a fortified early medieval settlement and unearthed significant artefacts which position a tiny Scottish village as a seat of major political power and influence.

Rare Late Roman pottery found during archaeological excavation at the site of a collection of eight unique Pictish symbol stones in Rhynie, has shed new light on this Aberdeenshire village, and provided fresh information on one of Britain’s most mysterious groups of people – the Picts.

Between AD400-900 it is understood that the kingdoms of the Picts became some of the most powerful political groups in the north of Britain, but there is very little documented history and archaeological record about these mysterious people.

The symbol stones that the Picts left behind are acknowledged to provide a record of their identity, beliefs and lifestyle, although the elaborate carvings on these stones have not been translated and very little direct work has been carried out in relation to these stones, until now.

The REAP team’s excavation near the Rhynie symbol stones – discovered between the 19th century and the 1970s – is one of the first large scale digs at this kind of site.

During their excavation the team made some extraordinary discoveries, uncovering burnt material, stone, pottery, metalwork, glass and animal bone within a very substantial system of fortifications at the site.

Dr Gondek said: “Some of the material culture we uncovered is exceptional. This is one of the most significant finds of early medieval imported goods in the north of Britain.

“The most remarkable were large fragments of a Roman amphora[i] which was originally from the Eastern Mediterranean. This pottery was most likely to be used for transporting or storing wine, or possibly oil.”

Many of the finds at Rhynie, such the small sherd of glass, which has been identified as a drinking bowl from the 6th or 7th-century AD, or the bronze pins and two amber beads, suggest it was a place of high status associated with fine dining and drinking.

Dr Noble said: “This type of find is exceptionally rare in Britain, and is practically unheard of as far north as this. The type of artefacts we uncovered in Rhynie have only been found in more kingly centres such as Tintangel in Cornwall and Cadbury Castle in Somerset. The nearest site of similar importance in Scotland is Dumbarton Rock, an early royal site of the Britons of western Scotland, which is almost 200 miles away.

“This means that what we thought was a backwater in this part of Britain may well be much more significant and that Rhynie can take its place as an important force in the power politics of early medieval Scotland.”

Equally remarkable is the context of the finds, for they were found within the remains of what would have been an elaborate system of defensive enclosures including two deep ditches and a massive timber palisade and remains of further wooden structures including evidence for buildings. Very little is known about the early power centres of the Picts and Rhynie provides an exciting opportunity to find out more about how power was consolidated when the first kingdoms of Scotland were emerging.

Dr Noble believes that the finds will affect how we understand the trade networks and political relationships during this period. The imported pottery is highly significant as it suggests Rhynie has political trading links with the kingdoms of the west.

He added: “This sheds new light on a thorny issue because we have so little historical documentation about the Picts. We don’t know how they existed or why they disappeared. We have snippets of stories from the early medieval writers through which that we learn that they’re politically active. But with this excavation we are getting the real physical evidence of who they were as a people – we just have to keep digging to find out more.”

[i] Amphora is tall ancient Greek or Roman jar with two handles and a narrow neck.