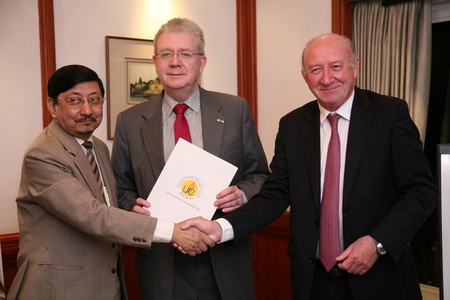 A Memorandum of Understanding (MoU) signed on 9 November in Delhi brings together an academic powerhouse in Europe’s energy capital with India’s dedicated university for teaching and research in energy studies.

The agreement was signed by Professor Dominic Houlihan, Vice-Principal for  Internationalisation at the University of Aberdeen and  Vice-Chancellor Dr Parag Diwan of the University of Petroleum and Energy Studies, India.

Also present was Scotland’s Education Secretary Michael Russell, who was leading the ‘Team Scotland’ visit to Delhi and Kolkata by senior representatives of Scotland’s universities. The aim is to further strengthen the links between Scottish universities and India and take forward the Scottish Government’s India Plan which seeks to build on the current market between the two countries.

The agreement between the universities follows a number of meetings and discussions on areas of mutual interest.

Professor Houlihan said: “The University of Aberdeen’s interest in energy research and the large range of academic programmes we now offer in engineering, geology, energy law and economics  makes this agreement particularly important and exciting.

“Our organisations are natural partners, and this paves the way for us to work together on a range of teaching and research-related activities, including an arrangement whereby students would spend two years in each of the two institutions and graduate with an Aberdeen degree.”

Launched in 2003, the University of Petroleum and Energy Studies (UPES) is Asia’s first dedicated Energy and Core Sector university.  It is now well on its way to fulfilling its vision of becoming a premier international institution providing world class education, training research, consultancy and outreach services in the energy, transportation and infrastructure sectors.

Dr Diwan, Founder Vice-Chancellor of UPES, said: “UPES is the only institute of its kind in India, and has just received the largest research grant yet awarded by the Indian government’s Ministry of New and Renewable Energy.

“Given our niche curriculum and the University of Aberdeen’s  strength in energy programmes we foresee a very beneficial exchange of students,  research initiatives and joint degree programmes.”

“Aberdeen is the UK’s energy capital and a European hub for research and technology; UPES is the first university in Asia to be solely focused on energy. The coming together of these two institutions, which are of huge importance in their own countries, will allow them to share research and open up new opportunities for students in the energy sector.

“The Scottish Government’s India Plan is designed to ensure that Scotland maximises the potential for co-operation between the two countries, and the memorandum being signed today is an important step towards that vision becoming a reality.”